Your assignment today is to gather together in one medium-sized concert facility, for one evening only, one dozen of the world’s most popular entertainers. Age, style, size, corporate affiliation and particularly musical pigeonhole is to be strictly of no concern whatsoever. Each act just has to have had a heck of a lot of their songs downloaded, perhaps maybe even sold, over the past calendar year or so.

Then, with a bare minimum of rehearsal or directorial guidelines of any sort – and an equally bare-boned budget to boot – a two-hour concert has to sequenced, scored, choreographed and executed upon a single stage utilizing all these chosen singers, dancers and accompanists, the entire proceedings recorded and video’d completely live, music and vocals, without re-takes, and the resultant miles of tape then edited, printed, promoted and distributed for public viewing into theatres.

Oh. And this all has to be completed within the period of a mere fourteen days, from show-date to release-date, by the way.

Finished laughing? Of course in a 21st century scheme of things such an endeavor would scarcely get past the imagining stage I agree, quickly dismissed out-of-hand (not to mention out-of-mind) as completely unfeasible; one legal, logistical – not to mention ego-tistical – nightmare of gargantuan proportions.

But, in that strange and distant galaxy known as The Sixties, where anything seemed possible, everything was tried at least once, and “no” was a word only uttered when speaking to people over thirty, undertakings of such grand socio-musical import were thought no more impractical than, say, making orange juice out of freeze-dried crystals then flying with them all the way to the moon and back.

What is hard to believe, however, is that one such concert event filmed inside the Santa Monica Civic Auditorium on the night of October 29, 1964 in front of a few hundred local high school students should not only survive to be released on DVD, but that its one hundred and twelve monochrome minutes remain as utterly entertaining, and downright engrossing, all these forty-eight years later.

The TAMI Show: Collector’s Edition, now finally available from our friends over at Shout! Factory is, you see, simply so, so much more than merely Monterey Pop without the lysergic, Woodstock without the mudslides or, yes, Altamont minus pool cues and homicide victims. True, one could consider this film as “just” the single most frantically paced, ultra-high-decibel time capsule of an extraordinary era ever preserved on disc. Or even, as Quentin Tarantino most assuredly claims, “in the top three of all rock movies.” 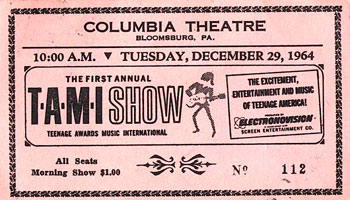 I will go all that one further, however: The TAMI Show (as in Teenage Awards Music International, by the way) is absolutely essential viewing to anyone and everyone who consider themselves fans, followers, and/or students of popular music.

Allow me to elaborate. The dozen acts, co-hosts Jan and Dean sing whilst skateboarding across the opening credits, did indeed come “From All Over The World.” Not to mention everywhere across the musical map as well: Kicked off by “the guy who started it all” as Jan (no relation) Berry announces, Chuck Berry duck-walks us all the way from St. Louis to New York City, where the about-to-be-renovated Brill Building sound is sung most proudly and loudly by none other than Lesley Gore (whose proto-feminist lyrics and attitude herein should have all you brand new Runaways fans repositioning the birth of girl-rock once and for all).

The magnificent Motor City is then represented by Smokey Robinson – pay particular attention to his Miracles’ dance-steps during “Mickey’s Monkey” – along with superstars-in-waiting Marvin Gaye (who performs two songs soon to be recorded by a waiting-in-the-wings Rolling Stones) and The Supremes (poised to leave behind forever their branding as “those no-hit Supremes” with an historic string of global million-sellers). Meanwhile, England swings Santa Monica via Billy J. Kramer with his Dakotas plus Gerry and the Pacemakers (…four of impresario Brian Epstein’s other clients unfortunately occupied overseas at this point in time, putting finishing touches onto Beatles For Sale it seems).

Why, even what we now know and love as that runt of the musical litter, Garage Rock, is represented by none other than the aptly-named Barbarians and their, I kid you not, one-handed drummer Victor “Moulty” Moulton. Plus special note must here be made of The Beach Boys’ four-song set, propelled practically through the roof by their drummer Dennis, as this particular footage was removed from most every existing print of The TAMI Show soon after release and has only now been fully reinstated in all its harmony-drenched, sun-kissed, Surf City splendor.

And then! As impossible to pin down geographically – not to mention musically or even vocally – as he remained for the rest of his career comes the one, the only, the hardest-working James Brown. 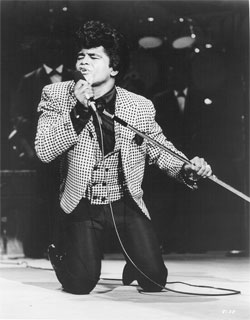 Now it’s been said before, but I’ll just have to say it again (and again and again): His performance in The TAMI Show remains one of the most jaw-dropping, above-kinetic, gut-and-thigh-ripping performances ever executed. EVER. Anytime, any place, by any one. Everything you may have heard about this man and these particular eighteen minutes (e.g., “the single greatest rock ‘n’ roll performance ever captured on film”: Rick Rubin) is absolutely, one-thousand-per-cent true. Just look at it yourself if you don’t believe me …or everyone else who has ever seen it.

Somehow, those newly-rolling, original Stones – with Brian Jones and even Bill Wyman’s vocal mic present – arose to the task of following Butane James that fateful night, and their performance closed the event, and the film, with a mixture of pure, simply pimply beat ‘n’ soul which wins over even many of the pole-axed teens who’d just survived James Brown’s set.

Finally, cue the entire cast and assembled dancers (watch closely for a very young Teri Garr!) back onstage to frug a mighty big storm up around Jagger and Richards and, scarcely two hours after it all began, the curtain drops. 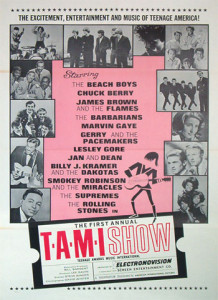 So, just another night of music, mayhem, and undeniable magic out in L.A. during the fall of ’64, right? But what novice director Steve Binder and his crew captured, and what today is immaculately preserved upon The TAMI Show DVD, is busting-full of rich musical (I repeat: James Brown) and cinematic (Diana Ross’ eyes literally filling the screen during “Where Did Our Love Go”) moments which have been oft-shot by everyone from Pennebaker to Scorcese since, but never truly duplicated. For what TAMI managed to mount and maintain all those years ago irrefutably remains the highest of bars for concert events, and films thereof, to reach even today.

It may, sorrowfully, have taken nearly half a century to make it into our homes, but this film has not returned anew one single frame, nor scream, too soon.

Trust me, Little Steven is right:

You have never seen, nor heard, ANYTHING quite like this before…..

Many swore by the mighty Dave Clark Five; most of course – especially the girls – pledged undying allegiance to those Beatles. But in my own personal rockin’ schoolyard sweepstakes, it was Gerry and his […]

Merry Clayton – I Struck A Match

Your humble Pop Digger, mouse in hand and mistle firmly under toe, scoured this whole virtual world in order to ask that musical question… “ WHY WOULD YOU RATHER BE LISTENING TO THE BEACH BOYS […]