Your humble Pop Digger, mouse in hand and mistle firmly under toe, scoured this whole virtual world in order to ask that musical question…

“ WHY WOULD YOU RATHER BE LISTENING TO THE BEACH BOYS THIS DECEMBER 25th? “

“Because I live in Syracuse, and it’s gonna snow until July. I’d rather be surfing!”
(Carl Cafarelli of This Is Rock n Roll Radio) 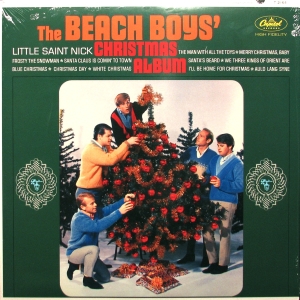 “Because two of my favorite bands, The Dukes of Stratosphear and The Pretty Things, have absorbed Beach Boy influences into their music.”
(Tina Max, Noise Magazine)

“Because KISS didn’t use any sleigh bells on their new release.”
(Pat Meusel, Sony Music Nashville)

“Because I like them a whole lot better than eggnog!”
(International Pop Overthrower David Bash)

“Because they offer something rarely heard these days: Great songs, strong hooks and outstanding harmonies.”
(Scott Finter, the true King of Pop) 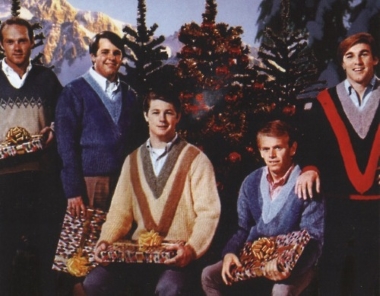 “i’d rather listen to dick dale.”
(Dick Dale, King of the Surf Guitar)

“The reason I would rather listen to the Beach Boys this Christmas is because it beats hearing that crappy muzak they play in the malls. By far, I should add!”
(Beverly Paterson of Twist And Shake Magazine)

“Because their unreleased 1970s Christmas album set a standard of excellence within the genre, alongside Christmas efforts by the Kingston Trio, Temptations and Phil Spector.”
(Mike McDowell, Blitz Magazine)

“I’d rather be listening to the Beach Boys this Christmas because, as was the case these last 50 years, there is no other feasible alternative to get closer to heaven.”
(Kerneels Breytenbach, General Manager, Human & Rousseau Publishers, Cape Town, South Africa) 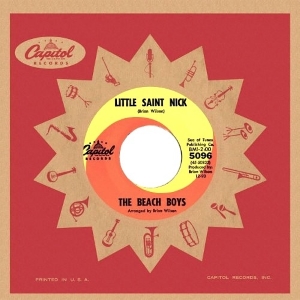 “Christmas in California is rarely depicted on Hallmark cards. With the weather often sunny and in the 80’s, the only hint of a seasonal change is the shortened daylight hours. For years I have tried to recreate the Rockwellian holidays of my childhood for my own little boy, only to be reminded by stepping outdoors that it was impossible. At seven years old, he’s never even seen snow up close. But one thing has been a constant in our family for many years, and that is the soothing harmonies of Beach Boys’ Christmas songs playing throughout our home.

This last year, my Beach Boys Christmas cassette went missing. I didn’t think much of it, until my son began to cry, begging me to buy a new one. “It’s just not Christmas without the Little Saint Nick song!” he wailed. It was then that I began to appreciate the uniqueness of our California Christmas, and was reminded that it is our own traditions and memories we make – the “spirit” of the season – that matters most.

Oh yeah, I did get another Beach Boys cassette. And Jeffrey Foskett’s Christmas At The Beach as well. Who needs snow?”
(Sherri Ann Skanes, educator, Ventura, California)

“Few would argue that along with Elvis’ Christmas Album and Phil Spector’s A Christmas Gift For You, The Beach Boys Christmas Album is certainly one of the quintessential holiday albums of the rock era. On that album you not only get five great original – and timeless – Brian Wilson melodies, but a rare glimpse at an era when the “down to Earth” Beach Boys Sound dominated the music charts.

I can still picture Brian, in his bright shiny ’64 Grand Prix, cruising down Hawthorne Boulevard and pulling into the Foster’s Freeze while he hums an idea for a new song. That song, Little Saint Nick, would fascinate us through the 1963 Christmas season, and continues to delight us all these years later.”
(Fred Vail, former manager, and first concert producer, of The Beach Boys) 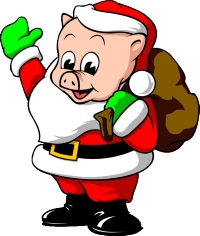 “Because their music represents all the hopes and companionship of the Festive Season, and because Brian and the group’s vocals are some of the best ever recorded.”
(Andrew Gladwin, actuary and part-time Beach Boy website owner, Harare, Zimbabwe)

“Couldn’t have said it better myself! Merry Christmas, everybody!”
(Santa Pig)

As those Beach Boys prepare to do it again for their 50th Anniversary, Gary Pig Gold reminds us of….. TEN REASONS WHY BRIAN WILSON: SONGWRITER, 1962 – 1969 SHOULD BE THE LAST BEACH BOYS DOCUMENTARY […]

If we could all just manage to put Bob Dylan’s Chronicles, Volume One down long enough to load up our audio device of preference with an extra couple’a hundred tunes, here are just a few […]