A young US group formed to kick out the jams, following in the fine tradition that Britain’s The Damned, The Clash and America’s Dead Boys, and Dead Kennedys had earlier found success with. Set in a high-rise tower block of pent-up emotions that would erupt into waves of musical malevolence and then seep insidiously across a brace of suburban lawns, Bored Youth’s songs enthusiastically matched a high degree of speed and anger, and spoke directly of angst, hopelessness and, of course, the bane of mis-spent youth, boredom. 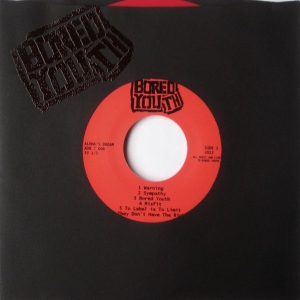 Whether the group themselves were products of any such personally challenging, alienating circumstances, or whether their individual origins lie in much safer, more comfortable surroundings doesn’t really matter, what’s important to note is that as a group they could channel many universal feelings of teenage rebellion, and articulate thoughts of futility and frustration turning them into a form of electrifying noise anarchy; seething, energy-fired primitive rock’n’roll shapes like To Label Is To Limit, No Chance, the furious motion of the rallying title cut, and eight more besides.

Few, it seems, were listening at the time, however, but all you young (and old) punks and appreciators of thoroughly livid rock’n’roll sounds out there now have a second chance to hear Bored Youth, thanks to the steadfast efforts of Chicago’s Alona’s Dream label. Like Green Day never existed!