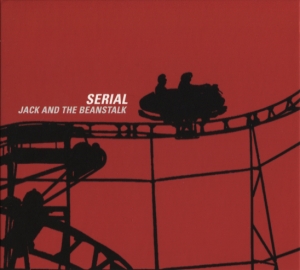 Serial was the first release on Torpedo Records out on the 22nd of September 1997 [TPCD1]. Around the same time as the magazine Impact #1. 1 000 copies were pressed in digipak, all hand numbered. [BUY] 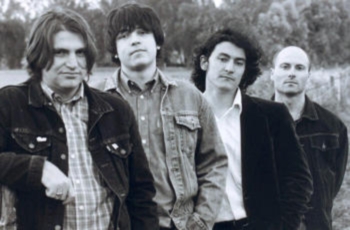 Jack And The Beanstalk are an Australian band lead by the charismatic guitarist, vocalist and song-writer, Joe Algeri.

He has been carving his niche’ in the local Perth music scene having performed in various groups such as the Rockefellers, the Summer Suns, the Stonemasons (with current Beanstalk guitarist, Kevin Borruso) and also in acoustic mode as a soloist.

In 1994 he started Jack And The Beanstalk which has now taken him to even greater heights. Originally just a 3 piece group, the band recorded a 4 song demo of guitar-driven powerpop which fell into the hands of David Hughes-Owen from Perth-based label, Spinning Top Records. He liked it and the whole venture became a lot more serious, internationally speaking.

If you come from Perth and play pop/powerpop there is an inevitable comparison to Dom Mariani and his groups Stems and DM3. And yes, of course Mariani has been an influence to Jack And The Beanstalk, you can hear that classic 60’s pop, garage and 70’s powerpop influence. However, it has probably been more the example that has showed Joe and the guys, and a lot of bands from Perth, that it is possible to acheive success even though you live in an isolated part of the world.

Five years on, Jack And The Beanstalk have numerous single, EP and compilation releases throughout Europe and America to enthusiastic reviews. Their first album …And Other Stories was released in late 1996 as a split release between Spinning Top and Parasol in the US.

In 1997 Torpedo Records released a re-packaged album with great new artwork as Serial for the European market. This release set the standard for all the Torpedo releases – first 1000 hand numbered in digipak.

We excluded one song and added three. The first single Gram Parsons, the great new song Irregular Guy and a version of Beat’s classic Walking Out On Love.

There’s something very special about this Perth, Australia, foursome Jack And The Beanstalk. There must be.

See, there are literally hundreds of bands around the globe (and even in Australia!) that play, at least on the surface, more or less identical melodic, powerful guitar pop with catchy, hooky 3-minute songs, loud guitars, strong vocals and sympathetically romantic lyrics.

But there’s something that makes J & TB sound so much better than anything else. It’s not that The Beanstalk would do the damn thing tighter, with more vibrance or skills, either. Many bands do it as well, again, on the surface. It’s just that Jack and the boys have a secret, the fundamental factor X.

Their songs are – mystically – as painfully beautiful and melancholic as they are erect, up-beat and rocking: combining the seemingly opposite qualities at one gulp (just check out the classic, achingly beautiful 10.000 Sunny Days, or the opener Doggy for reference).

Their songs aren’t even THAT extraordinary – they have a strong 60’s influence shining through, they’re kinda carved from the same wood (with a few exceptions, like the Kinks-tributing (I Want To Be Like) Ray Davies or the couple of more balladish tunes), and they’re also slightly lacking in dynamics and inner variation structures, but still they sound like excerpts from the Holy Book of Popheaven.

I have a feeling that Jack, i.e singer/songwriter/guitarist Joe Algeri has a lot to do with the factor X. His poignant, tremoring voice is pure magic and has a strong hold of the listener, as well as his accurate vocal lines that support the basically simple guitar chord-chains exemplary and with clever, almost genius-like mixture of emotional interpretation and melodic hookiness.

The successful production that combines garagey homespun-ness with clear, hard-kicking punchiness might have its effect as well.

Some people might easily claim that J &TB are just basic Perthian Someloves-adoring meat and potatoes popband, and I would even see why, but I can assure you that I have hardly ever received a CD for a review that I would have listened to as much as this or given such a divine status. 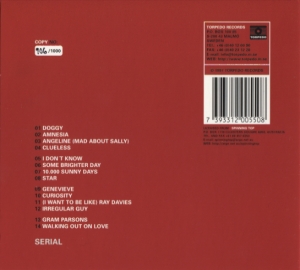 The release is Swedish Torpedo label’s first and a brilliant effort indeed from the Torpedo gang – the digipack sleeve is really stylish and handnumbering gives it personal character.

Both the band and the label are worth your support!

I loved the Jack And The Beanstalk tracks on the Pop Under The Surface and Bam Balam compilations (both are here), and I’m happy to report that Serial doesn’t disappoint.

What we have here are fourteen Raspberry flavoured, Kinks influenced, power pop cutees, brimming over with brash, fresh tunes, perfect throwaway songs with attitude, and with summer coming, a soundtrack for the sun.

Like last years Umajets reissue, a European label has picked up rights on a great album, while the UK companies just don’t seem to be interested. It’s a shame, because as a nation we really are missing out on some superb records, though you should be able to find this one.

This not a new CD from this wonderful Australian band, but a special Swedish release of the CD that came out on Parasol (…And Other Stories), with one track deleted and three bonus trax, not on the US release.

Honestly, if you did not get the US version, this is the one to get because of the extra trax. Jack is a band appealing to all DM3/The Chevelles fans as the they have a similar sound and approach and a batting average of great, enjoyable songs to boot!

and here are some voices about “…And Other Stories”

Sell your cow and buy this CD!

On release from both Australia’s Spinning Top and Parasol in the US, this is the debut album from one of the shining lights of the new Oz music scene. Hailing from Perth, Joe Algeri’s new band J&TB are all guitars and drums but of the melodic kind.

They’re more “pop” than “garage” – more Someloves than Chevelles for anyone who can make the distinction. The album blasts into action with Doggy a full frontal attack of blazing guitars, pounding drums and a spine-tingling guitar slide that leads into the close.

The album closes with the pastiche (I want to be like) Ray Davies, which sound like the Kinks, but not like any Kinks song I can remember, and it works wonderfully well.

However Some Brighter Day is simply the most annoying song I’ve heard since I don’t know when – it sound great, I love the tune, but the main hook that runs through it is exactly like Johnny Thunders guitar riff from You Cant Put Your Arm Around a Memory and my mind keeps rolling the two songs into a ball and bouncing it around inside my head. Infuriating! This, however is my only complaint and it really hasn’t spoilt my enjoyment of this cracking album.

If, as many predict, powerpop does make it into the mainstream, I’m sure J &TB will be giants of the genre!

If there’s one thing that can be said about Jack and the Beanstalk, it’s that they hold a very definate sound, that being straight down the line, no two ways about it – pop.

A combination of harmonies and the well suited voice of Joe Algeri mixes in well with their overall up-tempo backbeats.

There should be no reason why JATB shouldn’t be able to receive airplay, for they sure know how to write concise radio-friendly songs. In fact they should be able to cover the more than just the college/university scale, since there music doesn’t sit too left in the pop genre.

In this case, commercial radio might slot them in as well. Angeline (Mad About Sally) particularly stands out in the sense that it’s so catchy you instantly start singing upon first listen.

Genevieve has interesting lyrics, while Never Let You Down is reminiscent of some late 60’s early 70’s pop tune your sure you’ve heard somewhere before but cant quite place.

One could easily slide them with the Smithereens but overall this 12 track CD could appeal to a wide market.

This has been out for a little while now, but better late than never to mention it?.

It’s twelve tracks of sixties inspired Aussie guitar pop, mostly short so the total time is only thirty three minutes. Some of the songs have already appeared on singles or compilations, but I think these are different versions on this album.

It starts with five fairly similar sounding songs, the wonderfully melodic Some Brighter Day. There’s a song called Angeline (Mad About Sally) that appears to be an in-joke aimed at the Summer Suns.

It finishes with the song I like best (I want to be like) Ray Davies which has had piano and brass added. Perhaps it is inspired by the Kinks song I Wish I could Be Like David Watts.

It just need somebody (eg Kim Williams of the Summer Suns) to continue this with a song called “I wish I was Joe Algeri” or something like that. Anyway, I like these songs even better when they are performed live.

“Good pop is like teenage sex – uptempo, uncomplicated and all over in a couple minutes”