As those Beach Boys prepare to do it again for their 50th Anniversary, Gary Pig Gold reminds us of…..

TEN REASONS WHY
BRIAN WILSON: SONGWRITER, 1962 – 1969
SHOULD BE THE LAST BEACH BOYS DOCUMENTARY
YOU NEED EVER WATCH

1. Veteran SoCal socio-musical historian Domenic Priore, sitting alongside a tiki totem beneath a strategically placed orange branch, more than ably launches our story over a wealth of Eastmancolor’d freeway and beach footage, drawing, as only he can, that all-important connection from Gidget to Dick Dale all the way to teenage Brian’s Hawthorne, California music room. 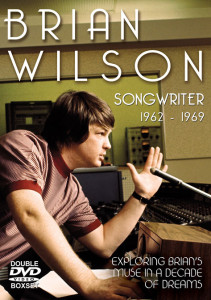 2. We see some very cool vintage Four Freshmen footage, and the undeniable influence that quartet’s equally cool jazz vocal stylings had on Brian and his Boys, explained to us by none other than First Lady of the Wilsonian Bass Guitar, Carol Kaye.

3. Next, back-to-back clips of Chuck Berry serenading Sweet Little Sixteen at The TAMI Show and the young B. Boys themselves belting out their just-released Surfin’ USA in full deck-swabbing gear illustrate, as thousands of words over the years have til now failed to, why CHUCK’S name is the one listed as composer of the latter hit.

4. Similarly, Inside The Music of Brian Wilson author Prof. Philip Lambert takes to the piano to juxtapose Phil Spector’s Be My Baby with Brian’s equally ingenious “answer” song Don’t Worry, Baby …as Phil’s former Wrecking Crewman (and Brian’s drummer of choice) Hal Blaine gets a little Prison Wall of Sound joke in at his ol’ boss’ everlasting expense.

5. We get to hear lots of fly-on-the-acoustic-tile recording studio chatter, stretching all the way back to the making of that very first Beach Boy record Surfin’ itself. Not to mention, I’m afraid, a terrifying example of father / manager / producer [sic!] Murry “I’m a Genius Too” Wilson putting the psychological screws into Brian at the infamous Help Me, Rhonda vocal session (which ended at least one person’s career). 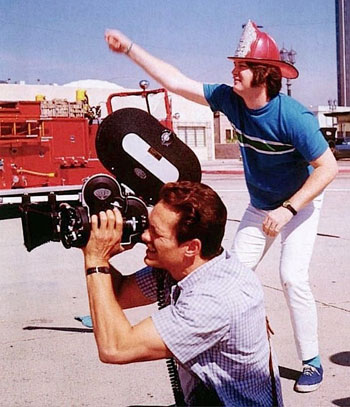 6. Why, we even get to hear Winterreise by Franz Schubert and Robert Schumann’s Dichterliebe used in the very same sentence as Pet Sounds!

7. Three Dog Night tripper Danny Hutton, however, has an even better word for this all: “Marijuana!!”

9. Which reminds me: Brian’s most note-worthy by far collaborator Van Dyke Parks is shown in the old Tower Records parking lot off Sunset Strip circa 1976 in an attempt to explain why Mike Love never could get a lyric such as “Over and over the crow flies uncover the cornfield” in to his head, let alone out of his mouth.

10. And, as if the Seventies weren’t cruel enough already to all concerned, we end with lifelong Beach Boy friend, confidante, and concert promoter Fred Vail still, forty years later, shedding a righteous tear recalling how he failed to get the band’s Add Some Music To Your Day single added to a powerful East Coast radio station playlist back in the daze because, he was told, “The Beach Boys aren’t hip anymore.”

Needless to say said program director – not to mention his station (and Top 40 radio in general) – is long long gone, Fred for one survives to tell this and many other poignant Beach Boy tales and, of this there can be NO doubt, Brian Wilson’s magical melodies are poised to enter their second half-century of faithful, never disappointing service to one and all.

This magnificent two-DVD package, and the fine cast of musicians, historians, and Wilson pals and players therein, do a most remarkable job in explaining to us exactly why. It should indeed be considered Required Viewing by all …who can tear themselves away from The SMiLE Sessions for 190 minutes or so, that is.

Your humble Pop Digger, mouse in hand and mistle firmly under toe, scoured this whole virtual world in order to ask that musical question… “ WHY WOULD YOU RATHER BE LISTENING TO THE BEACH BOYS […]