Being eight years old in the Toronto suburbs of 1963, I was at the perfect age – and in the perfect place – to, yes, Meet the Beatles. Because by the time “those four youngsters from Liverpool” hit the Ed Sullivan Show on 9 February 64, my friends and I had already spent the past six months familiarizing ourselves with John, Paul, George and Ringo’s initial A-sides via nearby mighty 1050 CHUM-AM Radio.

In other words then, the British Beat had no reason to invade Canada. It was invited.

Unlike with our big American neighbors you see, each of the Beatles’ earliest discs garnered automatic release on Captiol Records of Canada, beginning right at the beginning with Love Me Do in February of ’63 (the version with Ringo on drums, by the way!), and the Canadian Beatle Discography boasts many other rare slices of vintage vinyl totally unique to the genre, and as a result extremely collectable. 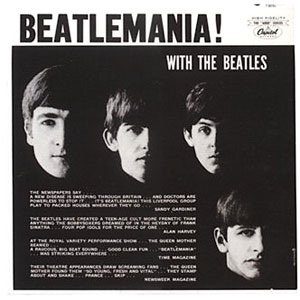 For example, the Canadian Beatlemania! album not only sported an identical cover and track line-up, but was released the very same week With The Beatles was in the UK (making it the first Beatle album released anywhere within North America), and its twelve-inch Capitol Canada follow-up, the Twist and Shout album – # 1 on the Canadian charts for ten weeks in early ’64 – was in fact the very first “big record” I ever had the pleasure to have owned.

And what a remarkable record it was: Fourteen action-packed tracks featuring all four – “count ‘em”! – of the band’s first UK 45 top-sides, plus a generous helping of Cavern-baked covers from their homeland debut album Please Please Me. Being too young then to know, and still too young to care if nary a Beatle wrote each and every note or lyric herein, Carole King’s Chains stacked so easily around Len/Mac’s similarly George Harri-sung Do You Want To Know A Secret, Bacharach and David’s Baby, It’s You seamlessly followed John and Paul’s P.S. I Love You on T & S Side 2, and the magnificent Arthur Alexander’s Anna (Go to Him), which kicked off this entire collection, continues to this day to hold more than its own against any Beatle composition you or even I could mention.

And while Lennon’s wholly larynx-bursting Twist and Shout completed the first Beatle album in Great Britain, the ever-inventive Canadian Capitol chose to close its namesake long-player with none other than – wait for it – She Loves You. Take that, Sir George Martin! (and tell Dave Dexter, Jr. the news.)

Meanwhile in the seven-inch division, Please Please Me actually hit the CFGP Top Forty in Grande Prairie, Alberta in April of ’63, while two of Capitol Canada’s most unique couplings, All My Loving/This Boy and Roll Over Beethoven/Please Mister Postman, sold sufficient (smuggled) copies to reach even the American Hot One Hundred a year later. Also, the U.S. Tollie label Twist and Shout/There’s a Place 45, which soared to Billboard # 2 in April of 1964, was an identically-formed Canadian Capitol Top Ten much, much earlier.

Plus, may I just add that every single one of the above-mentioned original deep-grooved, meticulously mastered Canadian (mono!) pressings put their U.S. and even U.K. counterparts – not to mention the latest CD incarnations, truth to tell – to total, unequivocal sonic shame. Really!

The moral of this absolutely Fab story then? Good music IS good music, and shall forever remain so, regardless of the size, format, packaging, advertising budget or even country-of-origin of the item in hand.

And of course, any PopDigging that doesn’t contain multiple uses of the word “Beatle” is a discussion I just must immediately bow out from.


P.S., and in closing: Is it only me, or is the Beatles Rock Band animation a tad cheesier than even that of the old Beatles cartoon series?

As we arrive at the thirty-third (!!!) anniversary of the Chief Beatle’s death, I found myself reaching far back indeed within the Pig Archives to exhume one of my very first-ever articles on the subject. […]

Even though you may not have been around – as in perhaps not even born yet – you’ll have no doubt heard all over the place and elsewhere lately that it’s been, yes, 2,608 weeks […]