THROUGH THE PAST, SMARTLY

For those who arrived at the party rather late – meaning the first new Stones record you ever bought had a big red tongue splayed across its label – the five years and ninety-nine minutes contained within Chrome Dreams’ Rolling Stones: The Mick Taylor Years DVD will serve as a more than welcome reality check against the band’s current 50th Anniversary onslaught. In fact, should you consider yourself a part of the ever-expanding constituency who swear the Stones’ best work was done during that half decade between the death of Brian Jones and the arrival of Ronnie Wood, this is one documentary which absolutely deserves your undivided attention.

Beginning as the Sixties became the Seventies and The Rolling Stones were struggling to grow all the way from “England’s Newest Hit Makers” into “The World’s Greatest Rock and Roll Band,” we hear the entire journey recounted by an impressive list of Stones biographers, historians and even session musicians, plus see the events themselves unfold via clips from the band’s initial, free Hyde Park concert with Taylor clear through their landmark 1969 and 1972 North American tours. Not to mention a slew of primordial promotional clips spanning “Jumpin’ Jack Flash” to “It’s Only Rock ‘n Roll” which cover, in fact, a defining era in the Stones’ development as the band survives Altamont, Allen Klein, and the death of its founding member only to find themselves tax-exiled and semi-comatose in the south of France. It is a period during which they also somehow start their own record company, learn how to make their own records (thanks in no small part to their late, extremely great producer Jimmy Miller) and along with The Who and Led Zeppelin forge the soon-to-become fantastically lucrative U.S. arena-rock circuit. 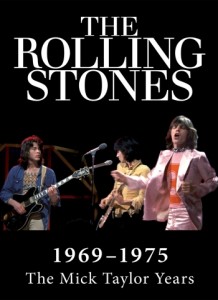 Now, the point repeatedly made during The Mick Taylor Years is how key a role the man actually played in each of these remarkable achievements: First, he joins the band at an ideal time, fully prepared to face audiences who by 1969 were expecting to listen to, rather than simply scream at, rock concerts which now lasted much longer than thirty minutes. With this, Taylor introduces to the Stones a new and subtly fluid approach to his instrument – a style which at first challenges fellow guitarist Keith Richards, soon perfectly complements him, and by 1973 practically supplants him both on stage and in the studio.

Granted, Mick Taylor may never have displayed the highly adventurous experimentation of his predecessor, but it is hard to imagine the Stones being able to fully come to terms with Seventies-scale rock or even rolling with Brian Jones still in the band …even if he did figure out a way to secure his re-entry visa into the USofA.

Yet most fascinating to me are this film’s interviews with Exile On Main St. support musicians Al Perkins and Bill Plummer, both of whom offer rare and insightful glimpses into the Stones’ recording techniques and intra-band relationships. Sadly, their stories (not to mention all those involving Gram Parsons) were left completely untold in the band’s own Stones In Exile film. I wonder why… 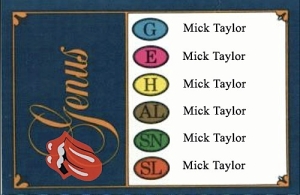 Acclaimed S.T.P.: A Journey Through America With The Rolling Stones author Robert Greenfield then explains how the tale soon starts to wind all the way down for the band, creatively at least, as he references the star-studded guest list Atlantic Records chairman Ahmet Ertegun assembled for Mick Jagger’s twenty-ninth birthday party in New York City.

Rock and roll – and The World’s Greatest Rock and Roll Band along with it – now found themselves not only fully embraced by high society, but confronted with its accompanying high-stakes corporate dalliances as well. Yes, rock was fast becoming Very Big Business, and Mick Jagger in particular became utterly besotted and seduced by these unforeseen turns of event …and at the same precise time his partner Keith was succumbing unapologetically to a degree of drug dependency which rendered him next to useless when it came to writing and recording new material. Again, enter Mick Taylor to pick up the slack …not that it seems he has even to this day ever been given proper (label) credit for his thankless work in these crucial areas.

Perhaps that had something to do with the man’s sudden, and surprising – even to some of his fellow band members it seems! – departure from the Stones in 1974. As Taylor explains most candidly herein, “My role in the Rolling Stones was to play guitar. I think after five-and-a-half years I’d really had enough. I didn’t feel that I could grow anymore. To me, they’d peaked (by) then.”

Controversial words indeed. But one listen to, say, Goats Head Soup should prove at least most of his point.

So, to many ever since, the Stones of the ensuing three-decades-plus seem more concerned with creating financial rather than musical history; a band which appears to carry onward if only to prove some sort of statistical point. Be that as it most very likely is, all I will add here and now is The Mick Taylor Years certainly deserves an immediate place within your Stones cache …even if you do feel more at home with December’s children than with Mr. D.

You can get it here.

Merry Clayton – I Struck A Match

The Rolling Stones – The 1964 creativity peak

Some introductory words from the writer: I’ve been a semi-professional writer from time to time for many years. I ran a music magazine in the early nineties and I’ve also written music books in Swedish. […]