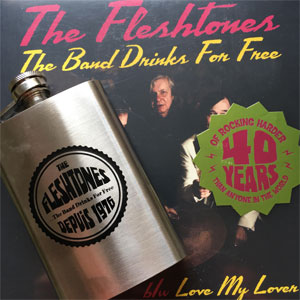 Joe Bonomo tells the inspiring and highly readable story of one of the most durable garage band of all time in his book Sweat – The Story of The Fleshtones, America’s Garage Band.

The Fleshtones celebrated their 40th anniversary in 2016 with their twenty-second album The Band Drinks for Free. Endurance indeed! Measured in number of shows: 2 000 +; a remarkable average of more than one gig a week. Two pièces de résistance cover the history of The Fleshtones: Geoffray Barbier’s documentary Pardon Us For Living But The Graveyard’s Full [2009] that came with the deluxe version of their Brooklyn Sound Solution album [2011].

And the second one is Joe Bonomo’s biography Sweat – The Story of The Fleshtones, America’s Garage Band [2007], which is the one I will spread the word about here. 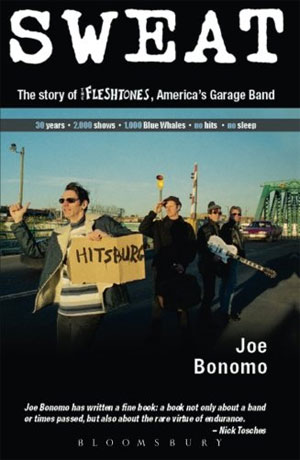 In Sweat – The Story of The Fleshtones, America’s Garage Band, Joe Bonomo sketches the backgrounds of the originators and describes the situation around the advent of a band that arose from the turmoil stirred in a basement of a certain house in Queens, east New York City, around 1975. Underground culture, literarily – prepared on a brew containing three vital ingredients: a. making raucous music the unpretentious and enthusiastic way, b. drinks (preferably loads of Blue Whales; a mixture of vodka and Blue Curaco Liqueur), and c.: a. + b. whilst letting the audience know it is party time. The Fleshtones have stuck to this winning formula since then, come rain or shine.

After a while, The Fleshtones got their things together, came out of the basement and boosted their confidence enough to start gigging at CBGB’s in New York City and other nearby scenes, rubbing shoulders with contemporary live acts of the same ilk, like The Ramones and Suicide (and to lesser degree Blondie, Patti Smith Group, Television and Talking Heads).

Their first substantial record contract was with I. R. S. Records. It lasted four albums (whereof two live albums) and ended in 1985. After that, they were jumping between record companies until some of their devoted fans at Yep Roc Records signed The Fleshtones in 2003, which secured stabilization (not to confuse with commercial success) of their studio output.

Joe Bonomo is heavily committed to find facts of the band and its members. He masterly puts the pieces of (in some places unquestionably) cryptic information together, and from there he manages to tell a coherent and thrilling story about a, most of the time, critically acclaimed band that never broke through to a wider audience. Any band would have thrown in the towel facing a fraction of the setbacks The Fleshtones experienced.

However, the members of The Fleshtones are not like any other. Clearly, they must have had thoughts about quitting more than once and there were also periods of low activity and side projects, but it seems that they never really wanted a break-up. Limited appreciation in the US was counter-balanced by strong popularity in Europe – especially in France and Spain –, which must have been a decision-making factor in favor to keep on keeping on.

Light is skillfully shed on how the very idea behind the fascination and true devotion to making music is realized to the last drop. Bonomo’s description in combination with the rock-solid conviction of the close-knit band is so inspiring that it gets morally encouraging at the same time. Despite a no-hit track record in moneymaking terms, The Fleshtones stand out as winners in the end all the same.

This mind over matter stubbornness goes hand in hand with how unmanageable The Fleshtones must have been. The management issue has been sorted out since many years, inasmuch as they are taking care of everything themselves when they are on the road, thereby getting the independence they need.

Apart from the useful index, list of sources and discography, the cover (live or/and on record) list is particularly interesting because it reflects their roots and wherefrom they gather inspiration. Among the more than 250 songs listed, English bands are, a little bit surprisingly, well represented: The Kinks (nine songs), The Rolling Stones (seven songs), and The Troggs (five songs). It is hard to go wrong with this kind of influences. Hoodoo Gurus also gets a fair share with four tunes, most probably due to their cooperation with Dave Faulkner, who got very impressed by The Fleshtones during a visit to New York City in 1979, long before the notion of Hoodoo Gurus.

The book contains a few minor flaws though, at least according to The Meticulous Fact Patrol: The Strangeloves offspring The Sheep released in fact two singles in 1966 (I Feel Good/Dynamite being the second one). Moreover, Greg (not Gary) Shaw was the Bomp label-head. Finally, Scopitone videos were more a French than an Italian phenomenon in the sixties. These slight inaccuracies may however easily be corrected in the second edition, because Joe Bonomo has not ruled out an update in an email correspondence we had. Let us hope for this ten-year update – which drummer Bill Milhizer said to me would not be equally thrilling as the previous 30 years. More than exciting enough for us ordinary mortals, I gather. Keep your fingers crossed!

Of the original line up, Peter Zaremba (song, diverse percussion and Farfisa) and Keith Streng (guitar, song and push-ups) are still in the band 2017. However, the “new-comers” Bill Milhizer (drums and second line marching) and Ken Fox (bass, song and push-ups) are no spring chickens neither; they enrolled in 1980 and 1990, respectively.

For those of you that find the band worth investigating from this story, but are not familiar with the music of The Fleshtones, I suggest to give the two first albums – Roman Gods [1982] and Blast Off! [1982¸ recorded in 1978] – a spin and wait for the click.

20 short comments regarding my personal favorites among albums recorded in the last year, or so. Hopefully, the spread between genres will allow everyone to find something new to dig, no matter what type of […]

Rounding up the usual suspects and some first time offenders in 2016: 01. Jack Oblivian And The Sheiks – Lone Ranger of Love Mr. Yarber joins forces with Memphian Sheiks with a tip top record […]