45 THINGS I BET YOU NEVER KNEW ABOUT THE COWSILLS


• Susan Claire Cowsill is the youngest human being ever to score a genuine Billboard Top Ten hit.

• John Patrick Cowsill, still the youngest male of the original family band, retains fond memories indeed of drumming four sets a night inside Rhode Island bars and wine cellars as a seven-and-a-half-year-old (“I remember the cops coming and shutting it down. We needed to get special permission from the mayor”).

• Today, John is married to an actual Bangle. 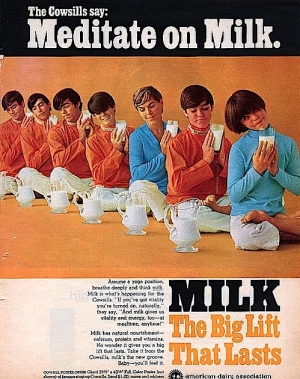 • It’s true: Cowsills father/manager William “Bud” Cowsill, a former Naval Chief Petty Officer, stymied his brood’s big move to network television back in the day. Yep, The Partridge Family was supposed to be about, and star, The Cowsills …except Bud didn’t want his wife’s Mini-mom’ing role to go to Shirley Jones, as the project’s producers were insisting.

(• perhaps not at all surprisingly then, when the real Mother Partridge took that final colored-bus ride to the hereafter, Susan had a dream she was adopted by Ms. Jones!)

• Another big break Bud apparently scotched was a Cowsills appearance in none other than Elvis’ The Trouble With Girls movie.

• They did, however, get to sing the Love, American Style TV theme. But only for one season.

• And then there was their iconic four-year promotional affiliation with the American Dairy Association: Milk. The Big Lift that Lasts, remember.

• On much the other hand, Bill Cowsill was hired to play guitar on Ike Turner’s single of Right On.

• Even so, Bud made, in Bob Cowsill’s words, “his most fatal of fatal errors: he fired Bill. From the group, and subsequently from the family.” And all after a late-night, blackjack and vodka gimlet-fueled confrontation in the Las Vegas Flamingo Hotel. Over marijuana and Waddy Wachtel. Sort of. Well, whatever the cases may have been it was, in Bob’s wise retrospective words, the beginning of the end of the First Family of Music’s Golden Era. “I’m a harsh taskmaster. I wouldn’t want me for a father,” Bud told People magazine in 1990.

• As proof, “Little Susie” can still be spotted, all over YouTube and elsewhere, fruggin’ up her usual storm alongside such vintage luminaries as Buddy Ebsen, Dick Clark, Dick Cavett, Mike Douglas, 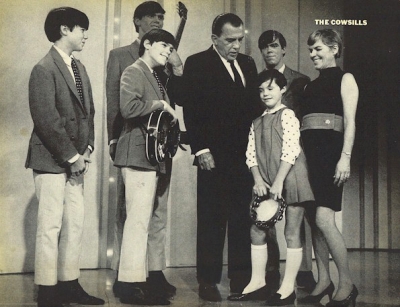 • Susan, however, has deftly filled the four-decades-plus since with an ear-bending assortment of accomplishments both vocal (Dwight Twilley, Smithereens, Carlene Carter and of course those Swiss orphans the Psycho Sisters) and instrumental (the Continental Drifters, not to mention playing Lil’ Sis to them Hobart Brothers).

• She also wrote a song, with Psycho Sis-in-law Vicki Peterson, which was recorded by both Hootie and the Blowfish.

• which reminds me: John Cowsill can be heard singing and/or keeping the non-digital beat behind such classics as 867-5309 (Tommy Tutone), You’re My Favorite Waste Of Time (Marshall Crenshaw), Surf City (Legendary Masked Surfers version, that is), Living Room Suite (Harry Chapin), No Frills (Bette Midler), Trouble (Bob Dylan) and, right on up to the present, That’s Why God Made The Radio by those one and only Beach Boys. 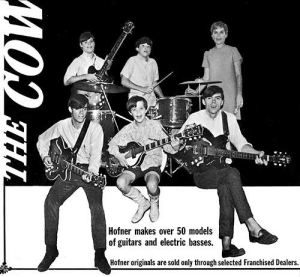 • Mattel Toys also included miniature facsimiles of both The Cowsills and We Can Fly albums as part of their Barbie doll house accessories.

• Interestingly, “Mini-mom” Barbara suffered from acute stage fright throughout her career as an on-stage and in-studio Cowsill. Officer Bud used to “bribe” her with the promise of a new dress for every song she successfully recorded. That, and an appearance on To Tell the Truth.

• Bob Cowsill had to settle for being Bachelor # 2 on The Dating Game. (Bachelor # 3 won the date with bachelorette Linda though)

• There was also a Fifth Beatle in the story …or an Eighth Cowsill, that is: Bob’s twin brother Richard. But unlike Pete Best, Richard didn’t even get a chance to perform once with the group. After, in his own words, “a 30-second audition,” Bud announced “You can’t play the drums. I’ve got enough people in the group, and you’re not in it.” Richard ended up in Vietnam instead …and not at a desk job either, as Bud assured his brothers and sister he was.

• The first record The Cowsills were ever allowed to arrange, produce, and solely perform (after 52 takes) all by themselves – on no less than Carl Reiner’s suggestion, most appropriately (he wanted to see what would happen if they “dropped their family image”) – was also their most successful record ever: a multi-million-selling version of the theme from Broadway’s iconic alt. musical Hair. So, among their many other accomplishments then, The Cowsills must duly be credited for first bringing the hippie ethos into countless pre-teen bedrooms the world over. 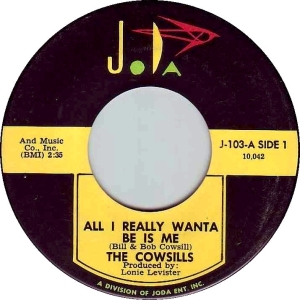 • Oh yeah: and the first rock ‘n’ roll group to ever perform on NBC Television’s Today show? The Cowsills.

• The band’s very first release All I Really Wanta Be Is Me, on none other than Johnny Nash’s JODA Records label, roundly crushed Simon and Garfunkel’s Sounds Of Silence in a Battle of the New Record on WPRO Radio Newport back in the fall of ‘65.

• More impressive still, The Rain, The Park and Other Things bumped The Who’s I Can See For Miles off the tip-top of Toronto’s mighty 1050 CHUM-AM’s Chart two years later.

• And speaking of Keith Moon’s old band, another well-known UK pop/rock combo, Vanity Fare (Hitchin’ a Ride, anyone?) brazenly titled their debut album The Sun, The Wind and Other Things …but maybe that was because it contained their version of The Sunray’s I Live For The Sun, not to mention Ian & Sylvia’s Four Strong Winds. Maybe.

• Michael Jackson once made a characteristically top-secret, very-late-night trip to a Haight Ashbury record store – “He smelled kind of like a Catholic priest” in the words of one employee – in search of records by “the band that does his favorite song”: The Cowsills.

• Indian Lake is one of Brian Wilson’s all-time favorite songs …next to Be My Baby, of course.

• Whilst taking a break from being one of Paul Revere’s Raiders, Freddy Weller took his version of Indian Lake all the way up to # 3 on the Hot Country best-sellers lists in 1971. 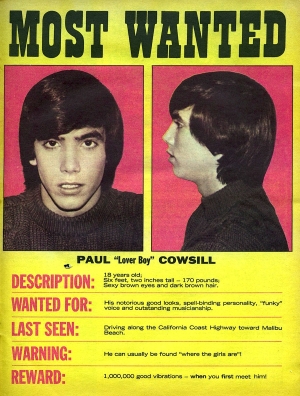 • At the same time, Bill was actually asked to join the Beach Boys. “Oh, Billy, don’t do it!” the head Boy warned. “It’ll drive you crazy. It’ll get you nuts.” Billy took Brian’s advice.

• However, John Cowsill has spent the 21st Century as none other than a bona-fide Beach Boy …of the Love/Johnston touring revue variety, that is. Fellow faux Boy Christian Love – yes, a son of Mike – is repeatedly on record as claiming John is, in fact, “the funniest Beach Boy.”

• All those years ago though, both John and Paul Cowsill were part of the road crew for Three Dog Night. Paul later went on to work in a similar capacity for Helen Reddy, Mac Davis, Neil Diamond and John Denver.

• The Cowsills’ 1968 hit We Can Fly has since been adapted by Muzak for elevator use within some of the world’s trendiest office high-rises.

• Fact: Probably the coolest double-bill ever was The Cowsills opening for – ready? – the Mothers of Invention in Barbados (“That was wild. My mom wouldn’t let me watch them” – John).

• Conversely, The Cowsills spent an entire week during the Summer of ’69 playing the Steel Pier in Atlantic City with Duke Ellington.

• In the extremely early Seventies, Bill took what remained of his Cowsills earnings and bought a bar in Austin constructed from a converted railway station.

• Bill later ended up in O Canada, where he formed the magnificent Blue Shadows band. “Hank Williams goes to the Cavern Club” is how they were described at the time, and their 1993 debut album, On the Floor of Heaven, is newly available once again. You should listen to this band immediately, and often. 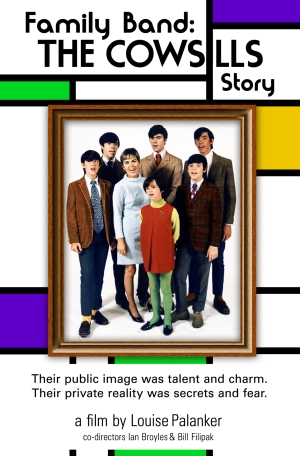 • Billy Cowsill’s last commercially-released recording during his lifetime was he and Randell Kirsch’s It Hurts To Be In Love, my personal favorite on a little tribute project I put together called He’s A Rebel: The Gene Pitney Story Retold (…and John plays drums, by the way).

• Producer Chuck Plotkin, for some unfathomable reason, abandoned the Cowsills’ legendary 1978 Cocaine Drain album sessions and went to work for Bruce Springsteen instead …speaking of darkness on the edge.

• Marc Nathan, A&R at Atlantic Records, got fired in 1991 for trying to sign The Cowsills.

• The record he tried in vain to issue was The Cowsills’ utterly INCREDIBLE Global album.

• The Burrito Bar on Staten Island, NY features to this day a specialty 12-inch beef-in-red-sauce burrito called “By The Cowsills.” It’s right there on the menu between the “For The Byrds” chicken in red sauce and the “Light My Fire” grilled steak.

• On April 28th, 2013, The Cowsills were inducted into The Rhode Island Music Hall Of Fame. “The fact that we are being inducted into RIMHOF and not the Rock and Roll Hall of Fame is more special to us. There is a little bit more meaning to us because we are Rhode Islanders, to be recognized by our own. It is very cool to go to Pawtucket rather than Cleveland!” (Bob Cowsill)

• “It is with deep sadness that we report that the search for Barry has ended. No longer is Barry missing. His body was found under a wharf in New Orleans in late December 2005 and identified via dental records on January 4th, 2006. The coroner has determined the cause of death to be drowning in the aftermath of Hurricane Katrina. Barry is survived by his siblings, two daughters, one son and two grandsons as well as a step-daughter and two step-granddaughters.” (Cowsill family statement)

• “It’s never been about stardom; about making millions. I’ve done that and it made me miserable, man. For me it’s just about getting the harmonies right; it’s about getting the sound down. That’s all I’ve ever wanted to do. It’s about the music; that’s all there is. I’d rather die a pauper having put a sweet tune on people’s lips than have the world in the bank.”  (William Joseph “Billy” Cowsill, Jr. January 9, 1948 – February 18, 2006)

Much information and assistance in the compiling of this material is due to Becky Presley and her remarkable http://bapresley.com/silverthreads site.

Family Band: The Cowsills Story should be considered Mandatory Required Viewing as well. Here’s where to go: Amazon.com