As we arrive at the thirty-third (!!!) anniversary of the Chief Beatle’s death, I found myself reaching far back indeed within the Pig Archives to exhume one of my very first-ever articles on the subject. Originally published three decades ago in either Outer Shell and/or Inside Joke Magazine, I believe its drift remains as relevant today as it was back then, scribbled in a fit of FM-powered pique from my childhood bedroom.

Perhaps you still feel the same way too…

December the 8th found me relaxing by my stereo for the first time in much too long. With nothing to do and nowhere to go, I found myself switching the radio on, only to be bombarded by scratchy old Beatles tunes on nine stations out of ten. “Which one died now?” I immediately thought, pessimistically thinking. It was then that I realized it was THAT time of year again: The anniversary of John Lennon’s assassination.

Tapes of Lennon’s final rash of interviews, published in magazine and book form dozens of times already, were again rebroadcast between the predictable parade of Lennon hits (In My Life, Strawberry Fields, Day In The Life, Give Peace A Chance, Starting Over and, of course, Imagine) (…how come they never play Cold Turkey or Revolution 9 ?!!). Being the loyal baby-boomer I am, I duly listened with half an ear as I read my mail, these songs being, as I’m constantly reminded, The Soundtrack Of My Life.

Most disturbing by far, I found whilst scouring the dial for a non-John tune or two, were the tear-soaked calls from listeners that seem to be the featured attraction of these annual Lennon radio tributes. Calls saying how shocked we were on that fateful night outside the Dakota. Callers nit-picking the minutest prop and dialogue inaccuracies out of the John & Yoko: A Love Story TV-movie bio-pic. And caller-upon-caller bemoaning the fact that Elvis Presley’s death continues to out-vigil, out-draw, and out-headline that of the Chief Beatle’s, despite the fact that, quote, “Presley died a wasteful, self-inflicted death long after his peak, while John was savagely gunned down in his artistic and spiritual prime.”

Believe it or not, I AM a fan and admirer of John Lennon’s life and music, and my thoughts and sympathies still find themselves turned towards his family on quite a regular basis. But I no longer find any legitimate purpose in dwelling on the man’s death throughout the media every December 8, particularly when such anniversary productions are dubiously disguised as “Celebrations Of The Man And His Music.” 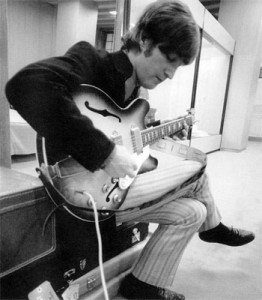 I, for one it seems, am GLAD Lennon’s death has not (yet) turned into the cabaret Elvis’ has, and hereby strongly and sincerely urge all his followers to finally awaken from their morbid mourning and listen instead to the music and words of TODAY as opposed to Yesterday. And I’d bet John himself would join me, if he only could, in demanding all you fossilized Beatlemaniacs begin concerning yourselves with the tunes, trials and tribulations of TOMORROW… and let sleeping Beatles lie.

The Beatles – A Fab Forty

Has it really been nearly five decades already since television’s greatest-ever talent scout took a chance on a brash young musical novelty act from far-off Britain? Yes, even to those who weren’t extremely tuned into […]

Various Artists – It Was 40 Years Ago Today

We’re in the midst of the usual media overkill celebration of the fortieth anniversary of the Beatles first visit to North America. PBS and NPR have got their oar in, I’m sure the cable channels […]