Scotland proved to be a real nursery garden of talents charged for the revitalisation of the almost forgotten rock’n’roll icons like Alex Chilton or Kim Fowley.

Lead by the forerunners of the Glasgow scene and Big Star recyclists, Teenage Fanclub, Douglas T. Stewart in his BMX Bandits with their Fowley/Wilson-facts treatments, The Diggers, the proud owners of the most-beatly nowadays-album, Donovan/Drake-like moderndaze folkists, Belle & Sebastian… Scots exchanged their traditional avarice for a generous invasion of unforgettable melodies.

Cosmic Rough Riders are the latest North-British sensation (discovered by Alan McGee, of course) with all the qualities needed to earn the “next big thing” title of global proportions. The unbelievable creativity of the authors Daniel Wylie and Stephen Fleming resulted with three longplaying releases from the spring of 1999 until the end of 2000!!!

The first, Deliverance, with the dominating country-pop shades as well as the second, Panorama, with the charasteristic west-coast harmonies, were released by their own Raft Records label while the new one, Enjoy The Melodic Sunshine, is actually a combination of some of the earlier highlights and some new material released by McGee’s Poptones.

Concerning the megalomaniacal ambitions (coming more from Alan than the band itself, but justifiably!) it would’ve been a real pity to let some of the soon-to-be-classics to be forgotten which is the exact reason for such an album conception. Even though it’s completely based on retro-visions, this album shines with unbelievable freshiness that completely excludes all the eventual negative “deja vu” comments.

Trying to concieve the Cosmic Rough Riders’ opus in one sentence would sound something like this: The country incarnation of the Byrds from the end of the ’60s trying to play their mid-’60s songs with an addition of some Beatle/Chilton harmonies sung by C,S&N…

The album, that would really be hard not to name like this, starts with a hippy mantra Brothers Get Around colored with some eastern sounds that are spread all over the first quarter of the record and one of the singles, Baby You’re So Free, perfectly crosses the east/west bridge. 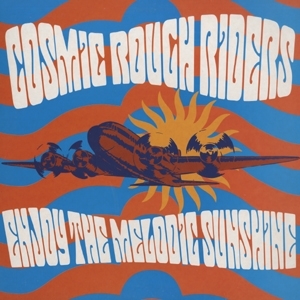 Another single, Revolution (In The Summertime) is absolutely the ultimate summer-song of the 2001. With a pretension of becoming a hymn of the generation(s) thanks to it’s antipolitic/spiritual/hedonistic conotations while Sometime and yet another single, Melanie, that someone forgot to release back in 1967, perfectly insert themselves into the definition of the hypnotic pure-pop nirvana.

The complete repertoire of the Cosmic Rough Riders causes a suspicion that it was actually well hidden in some unknown place over the last 35 years so that the younger generations could feel some of the magic too!

Second (or third if you count Postcards, last year’s collection of songs the Danny felt “didn’t fit in with the themes and moods of either of his records” … reviewed elsewhere on these pages) solo […]

… but before we go, let’s just clear one thing up, and it’s that this isn’t THAT kind of a surf, because Danny’s still riding those cosmic West Coast sun rays, while the closest he […]

After whole lots of “joy with the melodic sunshine-pop” of his former cosmic rough ride, as well as last year’s debut solo album Ramshackle Beauty, here’s something to fill the gap until the official follow […]