This set features sessions and concerts recorded by the band for BBC radio between 1977 and 1981.

First up is a John Peel session recorded on 26/4/77, featuring In The City, Art School, I’ve Changed My Address and The Modern World. With the exception of a curiously sluggish Modern World, these are great versions brimming with energy.

Completing disc 1 are 10 tracks recorded live at the Paris Theatre 1/6/78. This is an excellent set capturing the band prior to the release of All Mod Cons – Billy Hunt is introduced as the next single. Highlights include a self-censored Modern World with a great lead break, A Bomb In Wardour Street, which is introduced by a breathless Weller and is the best version of it I have ever heard, featuring a curious, but great, echoing guitar sound in the intro, and a great angry vocal from Weller.

The set closes with an excellent version of All Around The World featuring Weller’s favourite trick of dragging his plectrum along the top string in a couple of places, but the highlight for me is News Of The World. This is the first live version of it I have heard, but I love the studio version – admittedly the lyrics are a bit simplistic but the music is blistering, and I wondered if they could reproduce that live.

On the evidence of this version the answer is a resounding “yes” – it is bursting with energy, driven by Weller’s guitar work which easily matches the studio version. 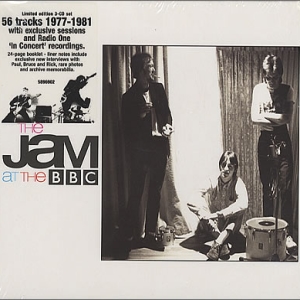 Disc 2 opens with another Peel session, this one recorded on 29/10/79 and featuring Thick As Thieves, Eton Rifles, Saturday’s Kids and When You’re Young.

I was a bit surprised to find that these versions don’t really add anything to the standard studio versions, but that does show the band were able to develop their songs given time in the studio, rather than watering down the original energy. These are good version, though, and well worth hearing, especially When You’re Young which reveals a hitherto hidden dub influence on the band’s sound.

Next up is a live session done for the B15 programme on 25/10/81, featuring Absolute Beginners, Tales From The Riverbank, Funeral Pyre and a cover of Sweet Soul Music. The track listing may not look encouraging on paper, but this is a wonderful set.

Tales From The Riverbank is solid, but Absolute Beginners and Funeral Pyre are great with bags of energy and rough edges, with Weller sounding really wound up. The real star, though, is the version of Sweet Soul Music, which features a great soulful vocal from Weller. This is complemented by excellent backing vocals, along with some great brass work and the sheer energy which the band brings to the song. It is so good it is worth the price of the set by itself.

The rest of the disc features 12 songs recorded live at the Golders Green Hippodrome on 19/12/81. Given the date of the show, and Weller’s subsequent disillusionment with the band in ’82, I was expecting this to be quite a lacklustre set but the band proves me wrong.

Admittedly it does feature a sluggish version of Down In The Tube Station At Midnight, but that is more than balanced out by great version of The Gift (why couldn’t the studio version sound like this?), Ghosts, Absolute Beginners, Precious, In The Crowd, Pretty Green, Start and Boy About Town.

As a bonus with initial pressings of the set, there is a third disc featuring a show at the Rainbow Theatre on 4/12/79. I saw one review saying that after the brilliance of the first two discs this one was unnecessary.

How can a disc featuring the quartet of songs When You’re Young, Strange Town, Eton Rifles and Down In The Tube Station At Midnight not be an essential purchase?

This is a great set drawing mainly on material from All Mod Cons and Setting Sons and the singles released around that time. Despite the great song selection, they manage to save the best to last and close with a great version of David Watts.

One curious thing about the set is that the f-word in Modern World is bleeped out (why?), but the one in Mr Clean, the next track, is left untouched.

Overall this is a must have for fans, but newcomers would be best advised to start with the studio material.

After having thrown his name around enough already I guess it’s time for the man himself. The US package of Weller’s latest solo album comes with three tunes added (after a blank interval of 32 […]

Of course, after The Jam called it a day, Weller taking the spotlight was an expected thing. Still, drummer Rick Buckler was the first one to continue the post-Jam musical course, forming a kind of […]