It was two score (that’s forty years) (I think) and several tens of thousand dollars ago (of that I’m sure) that I decided to get into the Record Business. For real. (Sort of.) I mean, Frank Zappa, Frank Sinatra, even those Beatles had their own labels. Why not me ??!

So armed with nothing but a basement full of innocence and ambition, not to mention several unwitting pals with pockets much deeper than mine, I spun my proto- (fan)zine The Pig Paper off into – you guessed it – Pig Records, and one momentous afternoon in June of 1978 several dozen fresh-from-an-unsuspecting-Capitol-Records-of-Canada-pressing-plant-during-the-graveyard-shift boxes of 45’s landed on my doorstep. Last time I checked, original copies of these discs, “with picture sleeve and rare two-sided printed insert,” go for several dozen dollars – U.S.! – over there on eBay. Yet I actually have three or four M+ copies left (without the insert though) stashed in a closet upstairs. Get in touch and I’ll make yez a deal, ok?

In the meantime, with the more than able assist of Treat Me Like Dirt: An Oral History of Punk in Toronto and Beyond author Liz Worth, let’s properly commemorate the 40th Anniversary of those seven little inches that could, shall we?

Our Cast of Characters:

Chris Houston – Bassist for the Forgotten Rebels, and so much more!

Stephen “Sparky” Park – Guitarist for Teenage Head, Simply Saucer and the Loved Ones

not to mention yours quite truly GPG – Founder of The Pig Paper, then Pig Records, plus I was also one of the Loved Ones’ other guitarists.

Edgar Breau: Sometimes I felt like if you were loud – if your songs were short, fast, loud, and ugly – it was a pretty good fit for what was going on. It wasn’t as wide open in terms of what genres bands could play within their own set. Now I think it’s really opened up. Back then, it was just a little bit more narrow.

Kevin Christoff: We didn’t sit down and consciously try to write punk stuff. And a lot of songs that came out of that period, if anybody heard them, probably went right through them if it wasn’t their style, or if it wasn’t the kind of thing they were wanting to hear.

GPG: This would have been late 1977, into ’78. We decided we were gonna record Simply Saucer. You see, I’d been carrying around for years in the back of my mind the first discussion I ever had with Steven Davey of The Dishes: One momentous night he hands me an advance copy of their first EP Fashion Plates to review. I open up the sleeve, pull out the record… but for some reason I don’t see Columbia or Warner Bros. or anything at all like that on the label. Well, it turns out The Dishes had put this record out THEMSELVES. “You mean, you can do that? In Toronto??” Steven said “Sure! All you need is a tape, tell them what you want on the label, then you take everything out to this place called World Records in Oshawa,” I think it was, “and they’ll do the rest.” That definitely put the bug in my ear to start Pig Records someday, someway.

Kevin Christoff: When it came down to choosing the single, She’s A Dog was a conscious decision. The song was popular in shows. It’s memorable in a very simple way. Whenever we’d play a lot of people would call out for it, so it seemed to be a logical choice.

GPG: We held a charity corn roast up on Hamilton Mountain to raise money to make the single. We were going to go into Grant Avenue Studio, Daniel Lanois’ soon-to-be stomping grounds, but we couldn’t afford it. I guess we didn’t sell enough corndogs. So the only other recording studio available in Hamilton was in this guy’s basement.

Edgar Breau: I think the guy’s name was John Boyd. It was not a great studio at all. It was a mistake to record there.

GPG: The second we start, John’s saying “IT’S TOO LOUD!!!” And I said, “Then you just pull the faders down. You’ve got to capture this. You don’t want to turn them down. They’re not the Eagles; they’re something else.” Long battle short, he just barged upstairs at one point and said “You mix the damn record.” 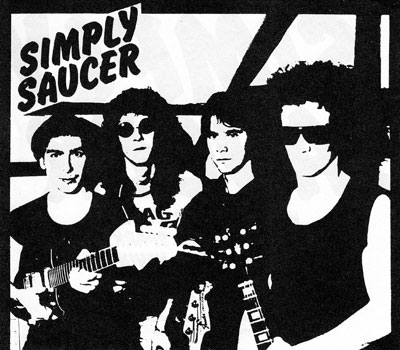 Kevin Christoff: It was kind of funny. I guess the guy got supremely disinterested in what we were doing because he ended up leaving us pretty well in charge. He went up to watch the hockey game or something like that, ha ha ha, which suited us fine.

GPG: Next I remember taking the tape into Toronto for mastering, and the guy had no idea. He said, “This is distorted.” I said, “I know.” And he reached for some knob – “I’ll fix that.” And I go “Well, no, you can’t; it’s supposed to be distorted.” He goes, “But you actually have distortion on tape!” I said “I know. And it took a long time to figure out how to get that, by the way.”

There was a day when they wouldn’t have cared so much. Those first Who and Kinks and even Stones records still sound amazing, even though to many people they’re such quote unquote terrible recordings.

Chris Houston: It was so hard then because these people would go into a studio, and they wouldn’t connect with the studio. So you’d have these horrible records of these great bands, and you wanted to love the band…

GPG: It was hard in those days to put out your own record. It took a lot of effort and money to press a thousand 45’s. Then mailing them out to all the fanzines and record reviewers and college radio stations, and anyone else you’d tracked down who you thought might be interested.

To help get the word out a bit more I decided to plaster as much of Toronto as I could with flyers announcing The Very First Simply Saucer Pig Record! But I thought I’d be smart and use wallpaper paste instead of staples; that way, our handiwork couldn’t get so easily ripped down off all the telephone poles. So I brought along my friend Martin E-Chord, who handled the paste bucket as well as played lookout, and by the time of the first train home in the morning we had the downtown core pretty well covered. Or should I say plastered.

I wasn’t all that smart though: by the time we got home the Metro Toronto Police had already called my house. “You have to come tear all your flyers down.” Seems the cops were already pretty familiar with anything “Pig.” They knew where I was.

GPG: But I did it because it was fun, and because I thought Edgar and the band deserved it. 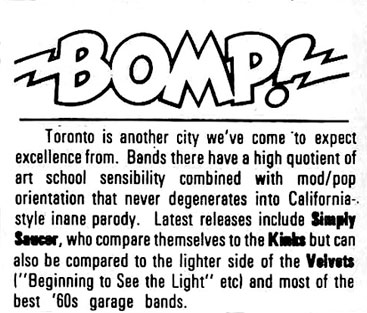 And you know what? I can remain extremely proud to this day that I was the only person who managed to get Simply Saucer onto vinyl at the time. Since then, many, many others thought that maybe they could’ve done a better job of it, and believe me I would’ve been right there to help in any way I could if that had happened. But no one else at all stepped up to bat. No one.

Kevin Christoff: But, we got some good reviews over the single. We got some positive press on that. Some people maybe didn’t like it, but you get that, right?

Stephen Park: There was something in Record Mirror that compared us with the Who and we just were floored. We couldn’t believe it! But that was somewhere in England, and it just seemed so inaccessible. We didn’t seem to be able to capitalize on some of the interest that the single was generating.

GPG: Cub Koda – remember Smokin’ In The Boy’s Room by Brownsville Station? – he loved Saucer. He gave She’s A Dog an amazing review in Goldmine, about how all the “dog, dog, dog”s in the chorus were driving his wife crazy. But how to make best of all this press that was coming in from literally all over the world? I was just one guy, with a bunch of Sharpie pens and cardboard mailers, working out of the basement.

Tom Williams: But most people were like one- and two-men operations. They didn’t have the distribution, they didn’t have the know-how, there was no support system in terms of national radio, national television; newspapers tended to ignore the local acts, there were no consumer music magazines that meant anything – a couple of trade publications that didn’t mean a lot. It was kind of a baby industry, really. I mean, it really was a bunch of people playing Let’s Make Records! I think we were pretty naïve and we said “We can do this,” and if we’d actually known what the stumbling blocks were we probably wouldn’t have.

But we did, and I think that’s always the way. Because when you’re young, you can do anything. In theory.

Lindsey Buckingham got kicked out of Fleetwood Mac (again), The Monkees made their first-ever Christmas album (!), and I am still waiting for that big Turtles Battle of the Bands Commemorative Special Anniversary Collectors Edition. […]

There are various bands who existed before 1976 but because they were a bit out of sync with current fashion and a bit raw, as time marched on, got drafted into what became known as […]