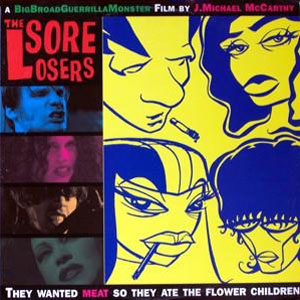 Royal Pendletons’ 7” A-side (I’m a) Sore Loser [Sympathy for the Record Industry; 1998] – backed with the intriguing instrumental Boo’s Bash – is in this case a can opener for the 30 song soundtrack of the low budget trash film The Sore Losers from 1997 (trailer; parental advisory: explicit content), in which Jack Yarber (Oblivian) plays the lead character, an extra-terrestrial gun-man previously sent to Earth in 1954 (for some unfathomable reason) to kill beatniks. This time he is coming back aiming for hippies and others that come in his way.

This truly weird film with a (I hesitate a little bit to call it) plot that is the opposite to straightforward is recommended only for passionate B-film lovers. The Sympathy for the Record Industry soundtrack is neither for Sunday school: Jack Taylor Experience (The Sore Losers), The Makers (Modern Day Freak; Mike Maker plays a comic book addict in the film) and Guitar Wolf (Invader Ace; Guitar Wolf also shows up in the film). Don’t say I didn’t warn you. 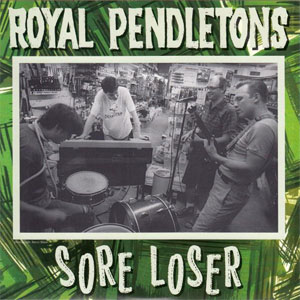 If sleaze movies are not your cup of tea, maybe The Royal Pendletons’ debut album, Oh Yeah Baby [Sympathy for the Record Industry; 1998], could call for your attention instead, not least because it is co-produced and engineered by Alex Chilton. You’d be a sore loser if you missed songs like Hot Rod Dissertation, You’ve Got to Pay the Chinaman and Pendleton Man.

Disclaimer: There exist a German bootleg version of the film The Sore Losers.