Now sure, I bet lots of other musicians in 1964 were inspired enough after first viewing A Hard Day’s Night to want to throw together their very own groups. And yes, from a half-century-plus’ hindsight the bridging of Dylan’s words with the Beatles’ licks and hair-do’s was a hybrid just waiting to happen. But it took a pack of visionary crazies like The Byrds to not only pull it off, but actually shove it right up the top of the charts for all to hear, see, and forever be amazed by.

Hard to believe that within a year of that first Beatle movie, Messrs. McGuinn, Clark, Crosby, Hillman and Clarke had the Number One record on the planet with their still utterly contemporary-sounding Mr. Tambourine Man.

Flash forward two years from that and we find a band, not content with forever placing a hyphen between the words “folk” and “rock,” busy pushing boundaries still farther out there, man. Long before Sgt. Pepper taught that dayglo band to play, The Byrds had already committed to disc tone poems about airplane flight (accompanied by John Coltrane guitar lines no less), introduced the sitar to western ears (including George Harrison’s), waxed philosophical on menagés-à-trois and composed jaunty pop digs about the joys of alien abduction. And did I mention David Crosby used The Byrds’ set at the Monterey International Pop Festival to publicly announce JFK had in fact been shot, and I quote, “from a number of different directions by different guns”?

Unfortunately, not even a band as seemingly pliant as they could withstand such turbo-charged, jet-sped times: By the summer of ’67, after two spectacular years and four spectacular albums, The Byrds imploded, as much a victim of their own successes as their own excesses. And there, had logic prevailed, the story should have duly ended and their American rock field been turned over to such brand new wonders as The Monkees and Tommy James & The Shondells to mine and exploit. 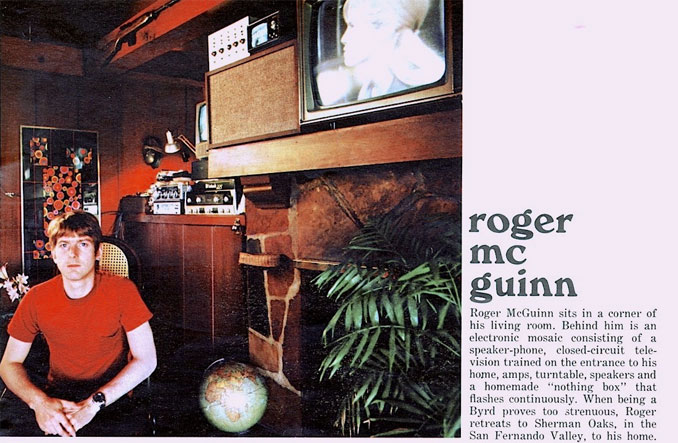 Luckily for us all however, today’s birthday guy Roger McGuinn, as always, had other plans. Following the combative sessions for The Notorious Byrd Brothers, Roger found himself left with only one original Byrd, Chris Hillman, by his side, yet with plans for no less than an ambitious two-record “History Of Modern Music(s)” project afoot.

“My intention was to chronicle music from the 13th Century to the present,” he explained. “I wanted to use elements of early music, progressing to Celtic music, showing how that was distilled in North America to produce various forms of folk music, then to show the origins of country music and bluegrass, R&B and rock music, and finally going into the future and exploring synthesizer and computer music.” All this on just four old-fashioned vinyl LP sides, mind you! Scoff today if you must, but try to remember the all-pervasive, wholly giddy, can-do-anything ambition of those long-ago times …and besides, be honest now: Wouldn’t you have rather heard The Byrds’ History Of Modern Music(s) than, say, Tommy or Rick Wakeman’s The Myths And Legends Of King Arthur And The Knights Of The Round Table ? I thought so.

So off set Roger and Chris to realize their Great Big Project. First enlisted to assist was veteran producer Gary Usher, whose recent work on Chad & Jeremy’s similarly ambitious “Progress Suite” no doubt made him the only man for the job. Next on board was a young rogue-about-town that Chris had run into at the bank one morning: Originally hired as a jazz keyboardist (for the Miles Davis portion of the History Of Modern Musics no doubt), Gram Parsons slyly broke into a rousing rendition of Buck Owens’ Under Your Spell Again halfway through his audition and not only forever wormed his way into Hillman’s heart but sidetracked Roger’s project so profoundly that it was decided to henceforth concentrate on the country – and only the country – aspects of the big History lesson.

So with a renewed contract and commitment from Columbia Records in hand, and Roger’s new Moog synthesizer packed back inside its case (for now), the freshly-reborn Byrds headed to no less than Nashville to record what would be their worst-selling record to date, but one which hindsight shows to perhaps be their most deeply influential ever. The one and only Sweetheart Of The Rodeo.

Tarnations! Not since Chet Atkins first brought those defiantly Elvis-headed Everly Brothers into the studio over a decade earlier had Music City, USA seen or heard anything quite like when The Byrds hit town in March of 1968. Yup, them L.A. hotshots may have been sporting suspiciously short new haircuts, and yes, they did have a gig set in a couple of weeks at the Grand Ole Opry, didn’t they? But no-one could mistake that odd odor pouring from their cigarettes, or the audacity at which they insisted on wiring together two eight-track machines in order to produce N-ville’s first-ever 16-track recordings. 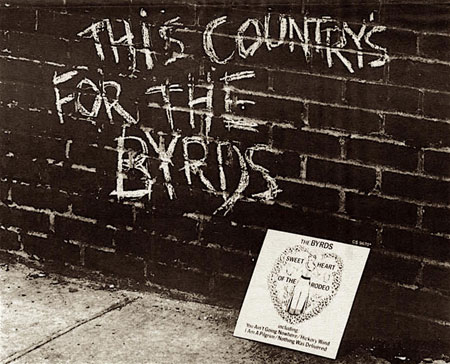 The news spread fast that something was indeed up, and some of N’ville’s A-team players, fresh from Bob Dylan’s John Wesley Harding, sat in to ensure Sweetheart spun a dusty ring of backroads authenticity. But upon its release later that year, The Byrds’ sixth album not only failed to win over many new converts in C&W circles, but forever alienated many of the band’s original followers, to whom the sounds of a pedal steel meant only one thing: Hee Haw.

Fifty-four (!) long years later, the debate continues regarding this album. Yet only a fool would not agree Sweetheart is a major work, easily the equal of any of the many landmark releases in The Byrds’ airborne canon. And even though, for contractual reasons, Gram Parsons’ voice may not be that audible on Sweetheart Of The Rodeo, his influence over the band, and countless bands to follow, was immense.

Unfortunately by the time the album was released, Gram had left The Byrds, star-struck and doomed, to hang right out with the Rolling Stones and later, with Chris Hillman in tow, eventually launch those daringly Flying Burrito Brothers. That left Roger alone to ride out The Byrds’ remaining years with only the brilliant guitarist Clarence White as a worthy accomplice.

1969’s Dr. Byrds & Mr. Hyde and The Ballad Of Easy Rider are the sound of a basically McGuinn operation, and for those of you who wouldn’t particularly be offended by, say, a Beatles with P. McCartney monopolizing the controls, these albums are very much worth checking out. Be forewarned, however, that as brilliant a Tele-slinger as White may have been (and GAWD, can he make his six strings talk’n’walk!), his personality lacked the wily trailblazing of a Chris Hillman, not to mention the Warren Commission-bashing firestorm of the Croz. Old pal Dylan’s My Back Pages briefly lifts Dr. Byrds out of the muck, but it all too quickly deteriorates into a self-consciously misguided “heavy” medley. “Bad Night At The Whiskey” indeed!

Meanwhile, Roger’s shamrock-stinkin’ Jack Tarr The Sailor on Easy Rider makes one wonder if at least the Celtic portion of the History Of Music(s) project was better left untackled after all, and as if to further flash a Danger Ahead sign, Jesus Is Just Alright would later become a hit for the – gulp – Doobie Brothers. Oh my.

Nevertheless, following the release of a trio of wildly, though quite occasionally brilliantly scattered final albums (especially recommended is the live portion of 1970’s Untitled), the five original Byrds would regroup twice: once in the Seventies to record a typically banal reunion record for David Geffen, and again briefly (thankfully) in 1991 as they were at long last inducted into the Rock And Roll Hall Of Fame. Since then Gene Clark and Michael Clarke have sadly expired, David Crosby is on his second liver, Chris Hillman became the Country star he always deserved to be with his Desert Rose Band and Roger McGuinn still wears his trademark Rickenbacker 12-string well towards its sixth decade of loyal use, justifiably proud of the work he accomplished, and the frontiers he conquered, as pilot for ten years of America’s Greatest Rock ’n’ Roll Band.

Peace on you then, Roger …and, Oh yeah! Happy Birthday !!

Gene Clark – The Byrd And The Best

The list includes both released and unreleased cover versions. Jokers Are Wild [1985?] The foundation of Jokers Are Wild (written by Pat Robinson and Dick Holler) is a spectacular pop song in every sense, with […]

Gene Clark – The Byrd And The Best (Introduktion)