As hard as it may be for us Pop Diggers to recall all these decades later, the extremely late Eighties somehow found Dave “Rave” DesRoches touring his home and native Canada alongside ol’ highschool buds Teenage Head, extolling the second-hand virtues of carpet kissin’ Hawaiian beer-drinking parties… as the remainder of the music biz moved uncaringly along to George Michael, Guns N’ Roses n’ other such comparative pleasures. However – and this is a big, all-important However however – Dave had spent most every down-hour he could during those distant days squirreled away within the nearest quiet zone, creating a veritable treasure trove of words and music which, while wholly incompatible with his Teenage night job would serve him more than well when, as 1988 became 89, he began seriously considering stepping out upon his very own.

It was at this exact moment I became acutely aware of Dave’s, how shall we say, dilemma when he dropped into my mailbox early one a.m. a little voice-and-guitar-direct-to-boombox epic entitled Farmer Needs Rain. Duly inspired – really, how could I not be?! – by said worktape, I immediately dumped it into my PortaStudio™ and, visions of Brian and Van Dyke’s SMiLE tickling each ear proceeded to toss on a bass, a 12-string acoustic, a Casio keyboard, and lots and lots of background vocals. Then I sent the suitably fortified Farmer back to Dave and returned to my own musical matters.

A couple of weeks later the phone rang. “Gary? What are you doing Sunday morning?” Nothing, I naturally replied. “Good,” Dave said. “We’re going into Daniel Lanois’ Grant Avenue Studio.” Why? “I want to record Farmer Needs Rain. I’ll sing and play, then you’ll add on all your parts; only this time you’ll have 24 tracks to use, not just four.” And who’s going to produce? “You are, Gary.”

And that’s all I needed to hear! 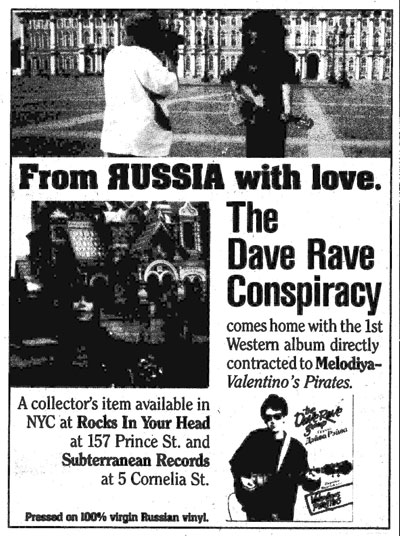 By dinnertime Sunday, our very good work completed and almost rough mixed to boot, I casually asked Dave if he had any more songs we could work on. Well! A week later I found not one song on one tape, but dozens upon dozens of songs spread across THREE 90-minute cassettes squeezed under my door. It was, of course, quite simple indeed to choose a dozen of those to take into Grant Avenue and create the core of what would become the Valentino’s Pirates album (while many more can now be heard in their original Dave-only form on the grand new Naked Pirates collection). We recorded by night, I bunked down up in Grant’s attic with my trusty Spector biography by day, and by the end of one utterly magical week we had an hour of what I still consider priceless material safely on two-inch tape.

The adventures, musical and otherwise, would continue when due to a luckily bizarre chain of happenstance Dave and I found ourselves illegally subletting on New York City’s Uppity East Side, grabbing a couple of Martin Sigmas from Matt Umanov Guitars, playing a string of Greenwich Village open mic’s, writing then recording Weight Of The World at RCA Studios (apparently in the exact same corner of the facility Elvis, Scotty, Bill and D.J. once cut Hound Dog)… then in 1991 by hook plus by crook we finally leased the finished Pirates album to none other than Melodiya Records for actual 120-грамм release back in the USSR! 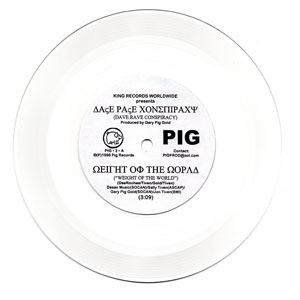 P.S.: By then, each Valentino (along with a couple of 45rpm out-takes) had already seen an incredibly limited Canadian cassette release via good pal Bruce “Mole” Mowat, while meanwhile back in the Big Grapple with our resident Coyote in tow we’d wily convinced Susan-Cowsill-in-waiting Lauren Agnelli and a between-Television-reruns Billy Ficca (!) to help us take this musical Conspiracy right out on stage and “all over the world” …and then some. Two more Pirate pieces were etched into New Zealand King Records vinyl circa ’96 and come Century 21 the entire album went digital not only on Jaimie Vernon’s esteemed Bullseye imprint but even c/o Cheepskate Shane Faubert and my To M’Lou label for good measure. Yep: all 73:37 turned out to be wholly CD-worthy as well! 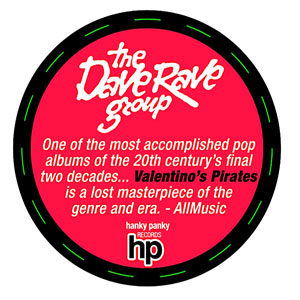 In other words then? Lo and behold all these long long years later Dave is still raving nightly beneath the hottest lights here and then there, I remain fully flabbergasted by, and most proud to have been a key player in what remains one of the most indelibly buoyant conspiracies ever to breach the deepest waves… and three full decades since those original sessions took place the very good folk over at Hanky Panky have just made available again not only the entire, complete, original Valentino’s Pirates album – on vinyl and CD – but over an hour of additional demos, out-takes, and unreleased-altogether material to boot.

So, if you missed the ship the first time, not to worry: We’d love to have you on board Today…