Can it really be true that Rolling Stone publisher/magnate Jann S. Wenner has personally conducted a decades-long campaign to bar The Monkees from induction into the Rock and Roll Hall of Fame?

“He doesn’t care what the rules are and just operates how he sees fit,” Tork told the New York Post in 2007. “It is an abuse of power. I don’t know whether The Monkees belong in the Hall of Fame, but it’s pretty clear that we’re not in there because of a personal whim.”

Now sure, the Monkees (along with the Beach Boys, Byrds, even Beatles, most every Motown act, etc. etc. etc.) certainly didn’t play every single note on every single record they ever made. Nevertheless, in 1967 Jann and his fledgling zine were riding extremely high on the Monkee-bashing bandwagon, using the television rockstars as the best/worst examples of all that was unhip, uncool, and truth be told un-San Francisco in the world.

Fair enough. I remember it also took Rolling Stone over a decade to figure out the Ramones too.

Regarding that great big late-Sixties Monkees-used-session-musicians brew-ha-ha though, as Peter most rightfully points out “Jann seems to have taken it harder than everyone else. And now, forty years later, everybody says, ‘What’s the big deal? Everybody else does it.’ Nobody cares now except him. He feels his moral judgment in 1967 and 1968 is supposed to serve in 2007.”

Of course, looking at the big picture, such Fame Hall squirmishes mean little if anything over here in what remains of the real world. But let me just remind Mr. Wenner and countless other Monkee doubters out there – and yes, there’s probably just as many in 2012 as there were in 2007, to say nothing of 1967: 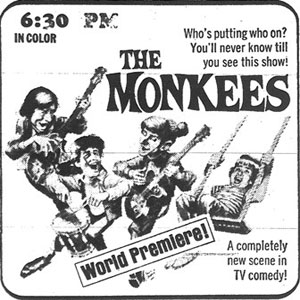 Forget about who really played all those flamenco breaks on “Valleri.” If you were born anywhere between the years 1955 and 1960, and consequently were just a tad too young to teethe your ears upon Pet Sounds or Revolver, like me you tuned into your local NBC-TV affiliate on the evening of September 12, 1966, sat transfixed for the next thirty minutes, and then told yourself “Hey! So THAT’S what a rock and roll band really lives, looks, sounds and acts like!”

Eating communal Rice Krispies at the break of noon, practicing in front of the patio window every day instead of going to school or work, yet always making sure to keep too busy singing to put anybody (under the age of twenty-five) down.

This was vital, and in my case at least life-changing information which just couldn’t be gleaned from spotting the occasional three-minute Dave Clark Five or Turtles performance on The Ed Sullivan Show.

But even more importantly – and, as it turns out, much more slyly and cleverly – what Peter alongside his pals Davy Jones, Micky Dolenz and Mike “Wool Hat” Nesmith really did during their fifty-eight half-hours on NBC was, for the very first time, bring the counter-culture boldly into the North American entertainment mainstream.

You must understand that prior to 1966, long-haired kids were only seen on television getting into no good whatsoever down some dark, garbage-strewn alley …that is until Sergeant Joe Friday rounded them up while giving a stern lecture on morality into the nearest camera.

Suddenly though, here were four seemingly happy-go-lucky kids with hair over their ears and guitars over their shoulders, without any apparent “adult supervision” such as parents or bosses in sight, living for all intents and purposes the same kind of wholesome apple-pie life as those over in Mayberry or My Three Sons.

Indeed, at the end of each broadcast day Davy always got the girl, the villains always got what they deserved, and the small-screen sun inevitably set to the accompaniment of yet another ultra-groovy new Nilsson or Boyce and Hart-penned tune (…which reminds me: long before “Penny Lane” or even D.A. Pennebaker, The Monkees damn well invented MTV too) (please, try not to hold it against them).

But for all their seemingly homespun zaniness, each week the Prefab Four were in actual fact getting up to the kind of (mis)adventures even A Hard Day’s Night wouldn’t, or couldn’t show.

Don’t just take my words for it though. Even Timothy Leary, unlike his supposed contemporaries way over at Rolling Stone, immediately saw between the cathode lines. And I quote (from Dr. Leary’s own The Politics of Ecstasy): “The Monkees’ television show. Oh, you thought that it was silly teenage entertainment? Don’t be fooled. While it lasted, it was a classic Sufi put on. An early-Christian electronic satire. A mystic magic show. A jolly Buddha laugh at hypocrisy.

“At early evening kiddie-time on Monday the Monkees would rush through a parody drama, burlesquing the very shows that glue Mom and Dad to the set during prime time. Spoofing the movies and the violence and the down-heavy-conflict-emotion themes that fascinate the middle-aged. And woven into the fast-moving psychedelic stream of action were the prophetic, holy, challenging words. Micky was rapping quickly, dropping literary names, making scholarly references: then the sudden psychedelic switch of the reality channel. He looked straight at the camera, right into your living room, and up-levelled the comedy by saying: ‘Pretty good talking for a long-haired weirdo, huh, Mr. and Mrs. America?’ And then ZAP, flash. Back to the innocuous comedy.”

And here I was as a wee tyke thinking I was just watching a live-action Rocky & Bullwinkle with amplifiers every week! 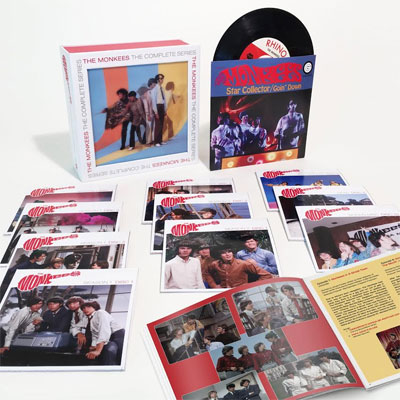 And now, many thanks to our heroes at Rhino Entertainment, you need no longer roam the nether regions of your satellite dish or settle for dicey VHS-generation YouTube uploads to hear and see what all the fuss was truly about.

For once again, the entire series of Monkeeshows, along with their even-seeing-isn’t-quite-believing 33 1/3 Revolutions Per Monkee television spectacular – plus a slew of Kellogg’s cereal commercials just to put everything in their proper hysterical perspective – have all been lovingly packaged anew.

Once again we can watch Mike trading places – and prosthetic noses – with Frank Zappa before running for Mayor (and issuing forth a most somber soliloquy which seems even more relevant to today’s socio-political atmosphere). We can see Peter bargaining to regain his musical soul from a metaphorically-steeped record-biz Beelzebub, and Micky battling the evil Wizard Glick and his far from subliminal television-brainwash machine (in an episode the fuzzy-headed Monkee, by the way, also directed). 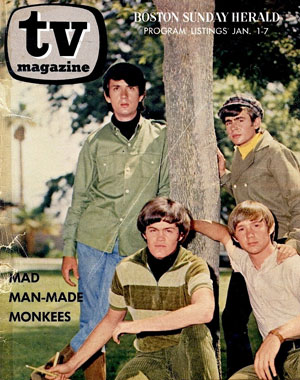 And Davy? He gets the girl(s). And also taught Axl Rose how to dance, need I remind anyone.

It’s all wacky and definitely wild throughout, you bet. But it’s particularly surprising how extremely fast-paced and ingeniously edited these half-hours are, and in Series Two especially each show began doing, saying – and showing – things on the family tube that were absolutely unseen and unheard of across the pre-Python/Saturday Night Live landscape.

Plus the music throughout is top-notch, it should go without mentioning. Even the sequences where Liberace takes a sledge hammer to a grand piano.

Come 1968 however, all that was left for The Monkees was to star in the greatest rock ‘n’ roll film ever made (it’s called Head, by the way) before paving the TV way for various Partridges, Banana Splits, and even their old nemesis Don Kirshner’s Rock Concert. Lest we never forget Mike Nesmith’s landmark Elephant and Television Parts series as well, full of the visionary and pioneering work he continues to this very date right there on his own Video Ranch Dot Com.

Why, it really is more fun than a barrelful of, well, old Rolling Stone magazines.

Actor and musician Davy Jones has died on Wednesday morning of a heart attack in Indiantown, Florida at the age of 66. Jones (born December 30, 1945, in Manchester, England) was best known as a […]