I Need That Record! [MVDvisual]

Subtitled “The Death (or Possible Survival) of the Independent Record Store” the filmmaker, Brendan Toller, imagines he’s telling some great conspiracy tale. But in reality he presents a partial picture, picking and choosing the facts that will heighten his thesis. The movie itself is composed of an intertwining of interviews with a select number of independent record store proprietors from a couple of regions of the country, with a focus on the demise of two from his youth in Connecticut (Record Express and Trash American Style), talking head interviews with some musicians (Glenn Branca, Lenny Kaye, Mike Watt, Thurston Moore, and others), Noam Chomksy and the always self-aggrandizing Legs McNeil, and voice-over narration on top of a mixture of graphics, illustrations, film clips and montages.

But what Mr. Toller never seems to acknowledge is that the national and major regional chains have been even more decimated than the independent record stores. There is pretty much only one major chain left in the U.S. of A., Trans World Entertainment, mostly d.b.a. F.Y.E. (A markedly partial list of the chains that have left this world: Camelot, Coconuts, Licorice Pizza, Listening Booth, Musicland, National Record Mart, Peaches, Record Bar, Record Town, Record World, Sam Goodys, Strawberries, Tower, Turtle’s, Vibes Music, Wall to Wall & Wherehouse.) 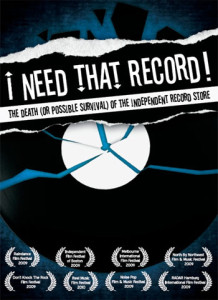 Mr. Toller throws out a few red herring, like in trying to elevate the moral standing of ind. shops claiming the chains were impersonal and staffed by a bunch of know-nothings. When what he and many of his subject mean are the stores where music retailing was/is only a small portion of their business, like today’s mighty Wal-Mart. While in truth back in the heyday of the chains I knew many staffers who were the equal in knowledge, interest and passion about music as you could find in any ind. shop. (Disclosure: I spent a year at the pre-Musicland Sam Goodys). Where the chains did deteriorate is in the breadth of their stock, especially in the post-‘76 explosion of the new indie record companies.

Or there is the “surprise” – like in Casablanca “I’m shocked, shocked to find that gambling is going on in here!” – that the nature of Capitalism is towards monopoly, by any means necessary (the Telecommunications Act of 1996 that is mentioned in the film, as one example).

On the other hand he does touch on many of the symptoms of the overall record industry’s problem: The devolution of music radio formats towards minimal playlists (but this isn’t new, the ‘70s FM invasion by Lee Abrams and his ilk was just a replay of the Bill Drake/Gene Chenault moves on the AM side in the previous decade) and consolidation of station ownership. The poor management and extravagances of the major labels. (At one time they were considered recession-proof, so management had little qualms about increasing prices whenever they desired, and throwing money away with seemingly little thought.) The claims about the effects of the Big Boxes and their loss-leader record sales. (Again this is nothing new; ask your grandparents about E.J. Korvette’s.) And in passing, the long-standing (ever since Pong hit the TV sets of America) ever-increasing competition for consumers’ time. Ultimately no really new information or insights are provided to anyone who has actually paid attention to the music business over the last few decades.

The real prize here is the extra material: some of the extended interviews from which Mr. Toller drew the segments he used in the movie. Twelve to twenty eight minutes each of Glenn Branca, Mike Watt, Ian MacKaye, Thurston Moore, Lenny Kaye and Paterson Hood. They start with the first records they ever bought, which leads into their evolution as music fans, their views on the business and other things. I found these segments quite interesting. One reason being, that except for Mr. Kaye, I’ve had limited interest in the music these fellows have made and thus hadn’t paid much attention to who they are separate from their music. For instance Thurston Moore lists the first album he bought was Iron Butterfly’s In-A-Gadda-Da-Vida. Then he goes on to talk about how as a kid he couldn’t afford new releases and thus mostly bought from the cut-out bins (nothing strikes as deep a nostalgic chord in me as reminisces of cut-out bins), which by their nature was stuff usually a bit strange and thus didn’t sell, so ended up as cut-outs. He mentions Mott the Hoople, Stooges, Can, Amon Düül II and others (mostly the preponderance of clinkers to be found there are skipped). Over the distance of time it’s hard not to read how those early days pointed towards the music he would go on to create himself. He goes on to talk about how he values the ind. shops that concentrate on some small niche. While Lenny Kaye appreciates the opposite aspect of ind. shops that they can have a surprising variety of genres. I was left a bit worried about the state of Mike Watt’s healthy, but not about his passion for the music (and the community that evolves around it) that drives him; impressed by the Glenn Branca’s non-pretentious iconoclasm; and Ian MacKaye’s insouciant intellectualism.