It’s been a good 15 years since Outrageous Cherry and I first crossed paths. There has not been a lot of change, other than people, between their eponymous debut and this album. To a degree, over that time, mastermind Matthew Smith has pared things down further, particularizing them. On that first go round the sound was more typically rock-band-out-in-the-garage. Here he’s still painting with echo and spinning intuitive melodies. But the component pieces are laid out more distinctly. Much of the hordes of indie bands that have come along in the intervening period have their tower blocks of pedals and over-indulgence of reverb that flattens everything down to two dimensions. Outrageous Cherry moves the pieces around to create dioramas. Mr. Smith has moved his vocals way up into the foreground giving a big anchor for everything else to hang onto, since pretty much all melody is contained there. The ever-more-so-Moe Tuckerish drumming (now courtesy of one Samantha Linn) is placed just an inch or so behind. Lead guitarist Larry Ray, who has been along for the whole ride, splashes in variegated colors off in the distance: some phase shifting in “Unbalanced in the City” and “Unamerican Girls,” relatively unadorned high leads-coming-down-the-telephone-wire in “Self-Made Monster,” and something like that old wah-wah in “Forces of Evil,” to name a few examples. The bass, now courtesy of one-time Cyril Lord Sean Ellwood, creates a slate base for the structure in a most unobtrusive manner. The occasional, almost ethereal, backing vocals hover and sway above. While shotgunned into the middle ground of a select number of songs are some handclaps. 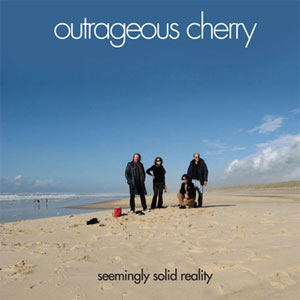 The meat of this eleven-track album is its middle: cuts four to seven. They are engaging and urgent, even the ballad, along with various strata of familiarity. “My Ghetto” is a snappy, mid-tempo tune that carries echoes of post-Smile debacle Beach Boys, one that if Dennis had sung with the verve of Carl. The rhythm of the song is stuffed with not just the bass and drums, but with a strummed electric guitar, the pant of the ethereal backing vocals and some transitory, slightly indolent handclaps. Meanwhile Mr. Ray’s fuzz guitar crosshatches the background, taking a step forward in the bridge. “Self-Made Monster,” a garage-rock grinder, is a bit of an outlier what with Mr. Smith’s vocals turned somewhat monochromatic. That combination heightens the Velvetness of the guitar strumming, drumming and the crackling, keening guitar solo. “The Happy Hologram” is a pretty ballad with setback, bubbling sci-fi efx in service of a counterintuitive, dystopian tale. While “Nothing’s Changed” is a savory, bouncy, mid-tempo pop-rock tune that adds some jangle enhancing its sweetness. At select spots more solid handclaps pop in which fortify the song’s propulsion forward.

The one thing that niggles at me every time I play this record is the segue between the first and second tracks. The lead off number, the title cut, is an instrumental that builds and builds. On its own its a winning composition. But for some reason it ends with a seven-second fadeout, that doesn’t just not let the tune resolve, but seems to suck its energy away, making the transition to “Unbalanced in the City” feel very disjointed.

I’m not sure if everyone will agree that, according to the “outrageous” studio wizz Matthew Smith, the Outrageous Cherry’s music is taking the band towards “an interstellar bubblegum concept album”, but the definition sounds so […]

I’m not sure if anyone will back me up on this, but I’d describe Matthew Smith as being the Phil Spector of moderndaze garage punk. Whichever of the ‘60s subgenres he’s tackling, an ever present […]

Outrageous Cherry – Our Love Will Change The World

After the last couple of albums, covering almost everything from outrageously catchy instant pop classics to dark spooky psychedelia, the ‘Cherry delivers some more of the same, it’s just that (IMHO) this is the first […]