This is a self-published tome attempting to tell the tale of an unusually long lived (1979-1994) rock club on the outskirts of Trenton, New Jersey. I spent the hell that was Jr. & Sr. High in one of the ring suburbs around Trenton, three miles down the Pike from the club. But the club didn’t exist then. It opened after I had already been at university for a few years, by which time I was ensconced back in Philly, so I was never really part of this scene. 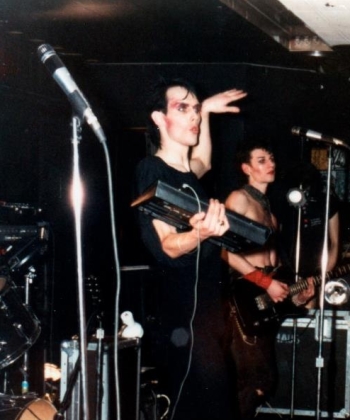 The first band I can remember going to City Gardens for was Bauhaus in March of ‘81, though I could have stopped in to see some local band during one my rare weekend visits to my parents before that. Randy ‘Now” Ellis, the main promoter at the club, recounts that over 500 people showed up that night. Back then the shows were held in the small back room, and it takes a wild imagination to think you could fit 500 people in there; I sure don’t remember there being more than a couple hundred, at most. I always preferred that back room, as short-lived as it was. It was more humane. The large front room, when it was finally cleared out, always felt impersonal. I figure that is partly why things evolved the way they did at the club.

With the increase in the size of the space came a requirement for an increase in needed infrastructure, which like any good self-respecting punk club was ignored. The city of Trenton caught up with them by the summer of ‘81 and closed them down. By that time I was out of school, back from my first foray around the UK, dumped by my girlfriend, unemployed and living back [in hell] at my parents’ house. I became part of the crew who pitched in to fix the place up: my job was painting the concrete floor. I got a t-shirt, some money, and into shows for free for the next couple of years out of that, contrary to Trish Barry’s claim on page 60.

All manner of people attest throughout this book: various staff, patrons, musicians, etc. But there is one large hole in the thing: there is no contribution from owner Frank Nalbone, the pseudonymous King Tut. (The original name of the club was King Tut’s City Gardens.) Not having his view about his whole experience can’t be ignored.

As you can tell from the book’s title after the first couple of years the club mostly centered on the Hardcore Kids. I don’t blame Randy, he had to do what would make money. And after New Jersey raised the drinking age from 18 to 21 the pool of patrons shrunk greatly. They did all right somewhat just by outlasting a number of the other clubs around Mercer County who gave up the ghost at that point. But I never liked the Hardcore Kids, and my attendance became rare. And once I moved back to Philly for good in ’84, it was down to maybe twice a year.

There is a certain redundancy to the tales recalled here: the cat and mouse games to stage dive, the fights and blood, the noise. I found a number of tales more interesting than I ever did the music: Henry Rollins recounting his brief time as a Trenton residence and his affection for the Trent née Crystal Diner down on Brunswick Ave. A wholly different, alternative universe tale of what happened to Bob Stinson at “The Late Bob” Replacements show than the one told in the movie Color Me Obsessed (this one recounted by and starring Jackie Zahn, one of my successors at WKDU). And there are simulated dialogues like this one between Leonard Graves Phillips of the Dickies and one Ken Hinchey:

LGP: “The song ‘If Stuart Could Talk’ is an homage to the Who. I’ve always had a kind of love-hate thing with the Who, and Pete Townsend always had this juvenile fascination with boyhood and manhood. As it turns out from reading his autobiography, he really is fascinated with his manhood. But the song is a tip-of-the-hat to them. My point is, the song was written about a talking penis, so it’s only logical that we have one on stage.

KH: “During the show, it gets to that ‘See me, Feel me…’ part, and he takes out the homemade puppet and starts using it, and you could tell Leonard was not into it. After a couple seconds he threw down the puppet, unzipped his pants, pulled them down, and whipped out ‘the real Stuart.’ It was out for a long time, and the spotlight was right on it.

LGP: “What?! Where does this stuff come from?! That didn’t happen. A complete rumor. Someone is confusing me with Jim Morrison. Who told this story, a he or she? A he? Then it definitely did not happen. But we got a couple of guitars stolen at City Gardens, for what that’s worth. It was after the set, and these kids just grabbed a couple of guitars and ran out the door.

KH: “I interviewed Leonard once for an article and he talked about being a Satan worshipper. He was totally serious. I asked him, ‘Aren’t you afraid of going to hell?’ And he said, ‘Who says hell is bad?’ You know who says that? The other side… That’s what they want you to think. The only reason we think hell is bad is because we’re not getting Satan’s perspective on it.’ I asked him if [Dickies’ guitarist] Stan Lee was a Satan worshiper too, and Leonard goes, ‘No, he’s a Jew.’

LGP: “I said I was a Satanist? No, but here’s my Satan story. Stan Lee and I got on a plane once with a human skull that I had purchased from [the now-closed New York store] Maxilla & Mandible. I don’t have her anymore, but I called her Moronie, as in [the Ritchie Valens song] ‘Bonie Moronie,’ [‘Bony Moronie’ was written and originally cut by Larry Williams, for what that’s worth – DMS] and I got a little story as to her origin. I wasn’t going to pack her of course, so I took her on the plane with me in a box. She was on my lap and I had Stan on one side of me, and a really nice born-again Christian lady on the other side. She had that kind of happy, desperate joy that nervous people have in general, let alone born-again Christians. She tried to make conversation and she said, ‘Oh, what are your reading?’ And I had some nineteenth century satanic, Joris-Karl Huysmans book, La-Bas, and Stan kept saying, ‘Tell her what you got in the box.’ I’m like, ‘Stop it. I’m trying to be nice.’

“As it happened, that was the most turbulent air flight I have ever been on. We’re flying and there’s a little bump and you get some nervous laughter around the cabin. Then there’s this big dip, and you hear a collective groan. The woman next to me said, ‘Oh, I fly all the time, it’s really nothing.’ And then we hit another one, a huge air pocket, and cups and stuff flew everywhere, and she started freaking out. Then Stan started waxing philosophical, ‘We’re on this thing and it’s hundreds of tons, and it shouldn’t even be in the air, they don’t know what keeps it up. We shouldn’t even be here!’ 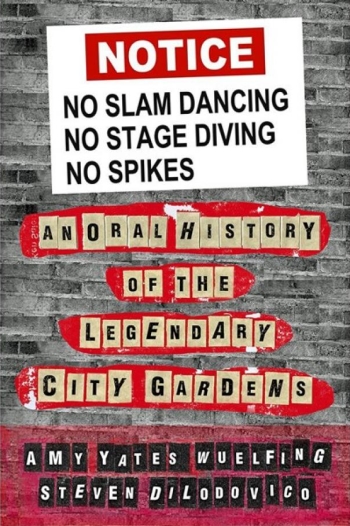 “It was one of those existential moments where I’m in the air, I got freaking-out, born-again lady on one side, Stan on the other, a human skull on my lap, and I’m thinking, ‘This plane is going down in a fiery ball and there is going to be one more head in the rubble than was on the flight manifest.’ That’s my satanic story.”

With all its foibles this book amusingly presents a particular place and time. (But then I still miss Korvettes.) Pretty much every teen/post-adolescent scene has a tale to tell. It just needs effort and drive to put it together, for which this duo should be commended; maybe after you read this you’ll be uttering the punk rock mantra: “I can do that!,” and will get yours down too.