The director Jim Jarmusch [born 1953] has a long-standing relation to music, shown in different ways by his filmography, but Gimme Danger – The Story of The Stooges is his first film entirely built around music (unless if some of the segments that comprise Coffee and Cigarettes are counted in this category). Coffee and Cigarettes consists of eleven short stories. One of them, Somewhere in California, is a low-key oddball dialogue between Iggy Pop and Tom Waits [1993], revealing that the crucial and mutual confidence between the director and the main Stooge started to develop long before the concept of Gimme Danger began to take shape, taken in consideration that it took eight years to realize this film and that Jim Jarmusch and Iggy Pop also collaborated in the out of the ordinary Western Dead Man [1995] as director an actor. 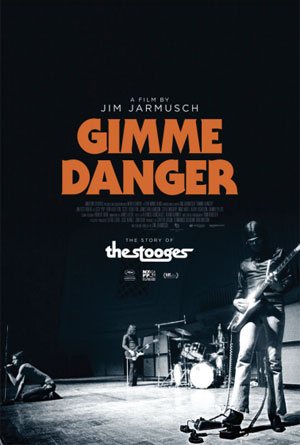 Gimme Danger has certainly benefited from this extended ripening which has left very little to the chance in this documentary. At the same time, it seems like the final result has been stripped off all redundancy in the process. Since Jarmusch is a big fan of The Stooges, Gimme Danger is a labor of love that puts The Stooges on the pedestal that was not there for them when they needed acclamation best; between 1969 and 1972 when The Stooges recorded three (only afterwards) celebrated and highly influential studio albums.

Even though the documentary is about The Stooges, and do not dig into Iggy Pop’s solo career, it is unavoidable that Iggy Pop/James Osterberg is the prime suspect; after all he was the facilitator behind The Stooges. James Osterberg is, in addition a storyteller of seldom heard quality and he shares many detailed memories in an outspokenly way. The visualization of Gimme Danger very much revolves around his storytelling.

James Osterberg tells about how it was to grow up in a trailer very intimate with his unusually understanding parents that let his drum set occupy the master room. Hats off to such supportive parents! The Stooges’ induction into the Rock and Roll Hall of Fame in 2010 must have been a mental victory over the suckers that back then mocked Iggy for living in such a minuscule home. Revenge can be a powerful motivation.

We also get to know that young James Osterberg was exposed to, and gladly absorbed, the whole gamut of music styles since he worked as a sales clerk at the Discount record store in Ann Arbor. This openness is one of the factors behind The Stooges urge and ability to push the boundaries of music that began to evolve after Iggy put his blues town Chicago drumming ambitions aside and teamed up with Dave Alexander and the Ashetons instead.

In terms of music mentality, The Stooges’ became close allies to MC5 by adopting their extrovert high-energy conviction and to The Velvet Underground by adhering to their nihilism. Quite the diametrically opposite attitude that characterized what was going on musically at the West Coast at the end of the ‘60s. Iggy formulates his despise for this rose-colored glass hippie movement in the documentary as “cultural treason” of the severest kind, particularly as this movement was manipulated into existence by forces driven by economic profit.

The Stooges avoided close association with any rock band or movement. Despite the fact that their Detroit compadres MC5 helped them to fix a record contract with Elektra, The Stooges withdrew from them when placard politics began to dominate MC5’s activities. Not belonging to any group of people or orientation became a winning recipe for The Stooges in the end, helping them to eventually – and long after they split – get their entitled position in the highest ranks of influential rock bands. As a true representative of this headstrongness, James Osterberg underlines The Stooges’ need of artistic freedom and independence in Gimme Danger; a living proof to the fact that individual sovereignty is a cornerstone in humanism.

An elaborate and creative collage/cut-up image technique embeds Iggy’s story in its contemporary visual context, with a diversity and richness of material that must have caused just claiming the rights for the footage to be a full-time occupation. Gimme Danger contains in addition a skillfully re-cycling of the rather scarce filmed material of The Stooges.

A scene I always have been mesmerized by is when Iggy has the crowd in his hands and vice versa. And also for the reason that the traditional use of peanut butter finds an alternative application area.

Any complaints, then? Barely. Well, you have to use a strong magnifying glass to observe that the list of many relevant participants could have been completed by John Cale, whose input would have been a real treat since he produced The Stooges’ debut album. (But such cameo is probably asking for too much.) And some of the animated sections tend to be over explicit at times.

But the main thing is that The Stooges is finally given their rightfully exposition and fore front place in the history of rock music in this eminent and professionally executed documentary. Because The Stooges are worth it. Gimme Danger should be avoided only by those with faint interest in ground breaking music that widely affected subsequent generations of artists.

If rough edged road movies with cameo appearances of excellent musicians is your cup of tea, this film seems tailor made for you. Wayne County Ramblin’ is a looong labor of love by Dan(iel) Rose […]