Overall, Record Store Day feels like a big conspiracy based on the idea of pressing semi-interesting exclusive reissues that change hands downstream of RSD in a process driven by a malign teamwork between 1. profit hungry middlemen who grab all the items they can find the first day after release and 2. their target customers, vinyl fetishists victims obviously with too much money to spend.

With this basic reservation, one must admit that RSD delivers a few pearls in the dung. For the sake of simplicity, and to move on to our topic of interest here, let’s say that these scarce gems have a purely coincidental connection with this humbug business. 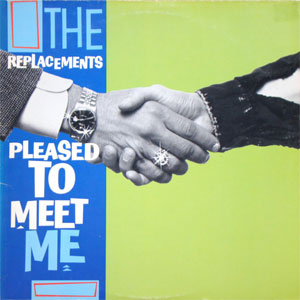 instead of wasting energy by criticizing this doubtful commercial set-up, we will in this context focus on the music itself. After all, there are some items that protrude above the surface of the manure. One of them, from the summer of 2021, is worth a closer examination.

What we will inspect here is a RSD album from the summer of 2021 consisting of a collection outtakes and alternate versions from The Replacements’ sessions for Pleased To Meet Me, which complements their fifth studio album (originally released in 1987). As will be shown, The Replacements brought their large song catalog to the studio (or created it there and then). Hence, they recorded a large number of songs which did not end up on the eleven track Pleased To Meet Me. These extras should be of interest to all PopDiggers out there.

The Pleasure Is All Yours

The album at issue, The Pleasure Is All Yours, was like the rest of the material ending up on Pleased To Meet Me, recorded November 1986–January 1987 and also produced by the fantastic Jim Dickinson. On The Pleasure Is All Yours we get twelve tracks on vinyl for the first time thanks to Sire/Rhino Records. (If you disregard the bootleg How Did The Vomit Get Up On The Ceiling?, that is.) 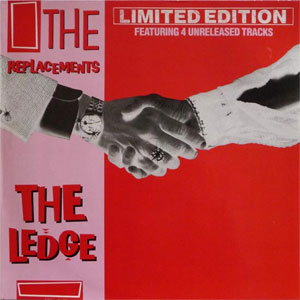 But let us start from the beginning. First time non-album songs from this session emerged officially was on the six track 2×12” The Ledge (1987). It contains three great covers (Bob Troup’s Route 66; Bobby Lewis’ Tossin’ And Turnin’ and Hank Mizell’s Jungle Rock) plus Paul Westerberg’s own Election Day.

It turns out that none of the extra material on The Ledge 12” appears on The Pleasure Is All Yours, which is perfectly okay. Furthermore, the same goes for Cool Water – written by Bob Nolan (founding member of the Sons of the Pioneers) – which became a cover on the flipside of the single Can’t Hardly Wait. (Election Day and Route 66 were also B-sides of two 7”/10” versions released in 1987.) 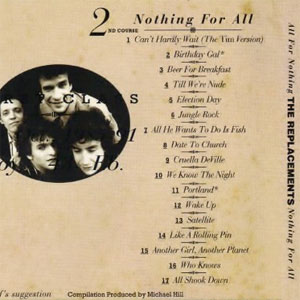 Then it lasted ten years until next batch of non-LP tracks from this session surfaced on the 2CD compilation All For Nothing – Nothing For All [Reprise Records, 1997]. The second CD, Nothing For All, contains 17 rare tracks, whereof five show up again on The Pleasure Is All Yours: Birthday Girl, All He Wants To Do Is Fish, ‘Til We’re Nude, Beer For Breakfast and an outtake of I Don’t Know.

It’s pretty easy to understand why the songs on The Ledge double 12” and those on Nothing For All did not qualify to the final Pleased To Meet Me. Common for these outtakes is their rough and rowdy attitude which echoes the good ole irresponsible ‘Mats when they were much more of partying punks that covered songs of their liking on stage in an assembly line fashion – albeit with occasional hiccups. Consequently, there is a tendency that Pleased To Meet Me contains the more polished songs from the sessions – those believed to have the greatest commercial appeal.

Perhaps Paul Westerberg reflects on this particular music career dilemma when he stands at the crossroads in I Don’t Know (his quandary is also visible on the schizophrenic cover):

One foot in the door, the other one in the gutter
The sweet smell that they adore, I think I’d rather smother 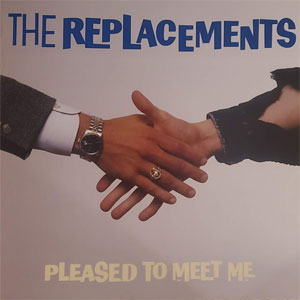 Next time the Pleased To Meet Me sessions were revisited, was when Sire/Rhino Records released the deluxe version of Pleased To Meet Me 2008 with no less than eleven bonus tracks. Some of them are demos, and four of them are among the previously released ones commented on above. Two more (alternate versions of Can’t Hardly Wait and Alex Chilton, respectively) reappear on the album of our interest here, The Pleasure Is All Yours.

The (most probably) final scrape of the bottom of the barrel was when Sire/Rhino Records released the 2CD Box set of Pleased To Meet Me (2020), most probably in order to satisfy the elite completists. This means that four more originals on The Pleasure Is All Yours that have not been mentioned in this article before appear on this box set for the first time: (Learn How To Fail; Run For The Country; Lift Your Skirt and Trouble On The Way.

A cover of Billy Swan’s I Can Help is the fifth track from the 2CD Box set that is on The Pleasure Is All Yours. At the same time, I Can Help gives flashbacks of the days when The Replacements toured as some kind of a living jukebox, playing covers from all over the place – sometimes just snippets depending on the length of the attention span of the day.

It’s annoying that this 2CD Box set is not referenced to on the information sheet belonging to The Pleasure Is All Yours, especially when all songs from All For Nothing/Nothing For All and the deluxe version (Rhino #513982) are mentioned properly.

Leftovers or not, The Replacements had from Let It Be (1984) and onwards a high minimum level of quality that justified these CD releases could be targeted at bona fide fans. In addition, many of the recordings provide interesting insights into the creation process and the progression of the studio work. But to be completely honest, the absolute need for this all vast extra material is only for the, after all, the very few who really want to know every detail about this studio period.

The Pleasure Is Really All Yours

With that said: we can state that all twelve songs on The Pleasure Is All Yours have been released before. Aware of this, we have to ask ourselves if it’s really worth having?

I would undoubtedly answer “yes”, and have several reasons for claiming it. 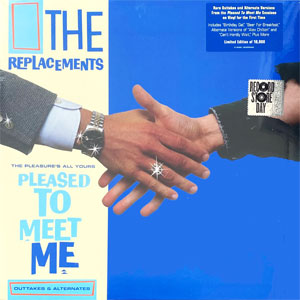 First of all, we get a great summary served on one plate of the non-album songs from the Pleased To Meet Me studio sessions that do not overlap with previous official releases on vinyl (The Ledge 12”). All songs are of high quality, but they were obviously judged to give a straggly and too rough-edged impression that disqualified them from being included on the slicker Pleased To Meet Me. Since the material at least is equivalent to a 2LP, such a release would have been an option from the start – but that format would probably have limited the album’s commercial potential. Also the substantial portion of covers works as a restriction in this respect.

Another thing that is beneficial with The Pleasure Is All Yours is that all the excess content found on previous CDs has been filtered out while the essence has been retained. It is in most cases annoying with the abundance of excess material on CDs – just because it is possible to squeeze in more than 70 minutes in the CD format, you do not have to do it. A further cause of irritation is all the duplicates and triplicate you get that automatically become deadweight just because it is sometimes the only way to get the things you are looking for if you want them on a physical medium. The mentioned CD releases contain the original album that you get whether you already have it or not – maybe good for newcomers, but it’s still a way to rewrite the history and tweak the idea with the original release.

The perfect handshake would therefore be: the original album; The Ledge 12” and The Pleasure Is All Yours (and, optionally, also Cool Water on the B-side of the Can’t Hardly Wait 7”) – all 26 songs are recorded during a three-month session spell supervised by the same producer. Let’s hope that the limited edition of 10,000 is large enough to cusp the worst speculations.

Color Me Obsessed: A Film about the Replacements

This is a portrait in negative. None of the Replacements are interviewed or make an appearance (until the “where are they now” ending and into the credits, where still pictures of the original band members […]