Stuck with the Memphis Book Again Blues, I guess (see previous reviews of Peter Guralnick’s Sam Phillips – The Man who invented Rock’n’Roll and Robert Gordon’s Memphis Rent Party – The Blues, Rock & Soul in Music’s Hometown). This time it is the fascinating # 65 in the 33 1/3 series of short books about albums that caught my attention; Bruce Eaton’s background story of Big Star’s second album, Radio City, recorded at Ardent Studios in Memphis.

Eaton’s book was published in 2009, which allowed him to meet almost everyone that were integral in the making of Radio City; producer John Fry, band members Andy Hummel, Jody Stephens and Alex Chilton. Richard Rosebrough and Larry Nix were also important and are therefore included in the book. David Bell speaks on behalf of his late brother, Chris. 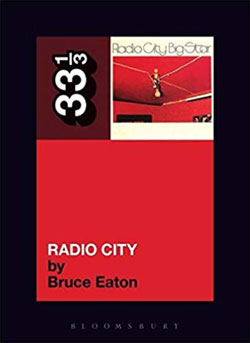 The lack of commercial success with # 1 Record sowed much discontent in Big Star. It is very likely that the Rock Writer’s Convention in Memphis in May 1973 (at which Big Star made an appreciated show) helped the reformed band to get back to the studio. The very convoluted story behind Radio City is not immediately apparent only by listening at Radio City, which instead gives an initial impression of being rather uniform. The non-straightforwardness in the making is nevertheless just as amazing as it is meaningful for the result. Same thing with how extremely aware and meticulous the nearest concerned were about the sound of each song; or as Alex Chilton put it: “Big Star is power pop for audiophiles”.

The song-by-song comments reveal the details of each track. Some rare photos are also absolutely priceless – as Big Star rehearsing in Alex Chilton’s bedroom and Al Bell in the Stax office with the Big Star sign in the background casually leaning at the wall.

If you haven’t picked up the 33 1/3-series yet, Radio City is a good way to start. Everyone with interest in popular music will find at least one album interesting enough to explore further.

Alex Chilton did not only sing harmony vocals on Chris Bell’s You And Your Sister – the B-side of I Am The Cosmos (released 1978) – at Ardent Studios in Memphis in 1975, he did […]