Those should’ve been the days:

Yessir, that last tour was sure a sumbitch, wasn’t it? Winter Dance Party my lone starred ass! More like a near month hauling all across those snow-crusted heartlands in the back of a school bus, sleeping with our guitars and our Jack Daniels and our rolling crap games. And precious little else, believe you me! But I suppose if they’d paid us what they were supposed to, we may have started flying between gigs instead … and that might’ve been even worse.

Sure was good to dump my brand new band and finally get back to New York City and my brand new wife, you bet. 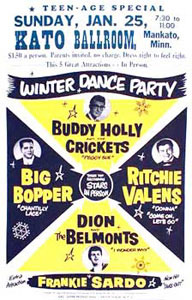 And even though the past (in the form of former bandmates and management) kept calling – too bad there weren’t any answering machines back in the Summer of 59! – I certainly had lots of songs to write, melodies to sing, work to do …and fun to have.

My good bud Phil Everly immediately helped see to that: he always was promising the minute he dumped his brother, and me my Crickets, we’d just walk that block or two south from my new apartment through Washington Square Park and begin to seriously trawl the grand new sights and sounds of Greenwich Village.

So we did. For a year or two, in fact, we did little else!

And of course it was there, in some greasy little basement off MacDougal that we first saw, and heard, and then made an important point to meet, this scrawny kid from the Midwest name of Bob.

He was a funny little feller that continually swore we’d somehow locked eyes when I played the Duluth Armory …though unlike yours very truly, he’d only wear his glasses OFF stage. Still, he could sing up a storm, and soon enough write up one too.

Too bad management again – his this time, not mine – prevented me from taking him into the studio like we were busy planning. But nevertheless, he signed with Columbia Records rather than me and Phil’s own label, and made out pretty darn well for himself.

You oughta read his Chronicles book, by the way. It’s a Good One.

Anyways, money doesn’t talk, it swears, as Mr. D. once said. So eventually Phil got back together with Don, I hired back a couple’a Crickets, and we all headed off on a joint tour of England. 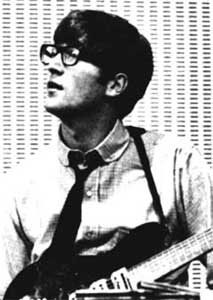 Opening up for us here and there were these four new guys from Liverpool who’d simply slapped Everlys harmonies over Crickets instrumentation, and the rest was soon… well, Beatlemania it was called once I’d gotten them safely over the pond and onto the Ed Sullivan Show. They were good guys though, and wisely recognized I, not they, had actually invented that so-called British Invasion. Only back in Lubbock in 1958, you see: Listen To Me, Think It Over, Not Fade Away…

”THERE’S yer fookin’ Merseybeat, mate,” as the Chief Beatle kept telling me and everyone else who could hear. I had to agree. Though he never wore his nice big black specs on stage either, by the by. But my, what a lovely character that Johnny Rhythm was.

So yep, those Beatles recorded my very own Words Of Love, and I have to admit those powerful royalties kept Maria Elena and Charles Hardin II in gas and grits as all my own musical monies remained tangled extremely up in legal limbos.

Still, I eventually made good on my dream to record an entire album of Ray Charles songs, and duetting with that afore-mentioned Zimmer Man on his Nashville Skyline brought in a few deep dollars to boot.

But then, like so many, many of us, the Seventies and especially Eighties were tough, empty years full of too much energy but too few (creative) outlets. At least I made it out pretty alive. My man Elvis, to cite the most obvious, didn’t, did he?

So here I sit today, luckily not being called a Golden Oldie as much the Godfather of alt. Country – whatever the heck THAT means. But I can still headline any damn PBS musical fundraiser I choose to …especially when an original Cricket or two care to join me.

And while Maria Elena may be long long gone, our boy Charlie is still ringing his Strat in a honky tonk right near you this very night no doubt. Better that than doing Vegas as “Son of Buddy” I guess.

Oh, and that Weezer song? It really did suck, y’know…