Back like some rare form of locust on the swarm again after seven years are the Maharajas with their fifth long player. The only morph since last time is the swap of drummers: Jesper Karlsson (Nymphet Noodlers, Diamond Dogs, Thunder Express, Dundertåget, Odyssey/Black Temple…) in for Ricard Harryson. For you newbies the band is a Swedish conglomeration of a guitarist from the first international garage rock revival, Jens Lindberg (Crimson Shadows, High Speeed V, Blindshag, Mongrels, Cliffhangers, Stomachmouths, Maggots…) — the heart and soul of the band, and some young ‘uns from the second international garage rock revival: singer/guitarist Mathias Lilja (Strollers, Satans, solo…), and the mysterious Ulf Guttormsson, bass and prime songwriter.

This album might be their finest yet: Strong, kick-ass rock with end points now stretched out to encompass power pop (but unlike many modern pretenders to the throne they don’t forget the power part of the equation, nor the harmonies). Across the course of the album the general sense of movement is from the pop to the rock, with switchbacks along the way. It’s most familiar, occasional reflection is that of Matthew Sweet, if in some alternate universe he hadn’t lost his way after Girlfriend. (See the intro to the bridge of the soaring, janglicious title cut.)

The album leads off with the pumping, driving Nothing in Return, a taut 2’ 45” (8 of the 14 cuts here come in under three minutes). Stacked guitars and vocals weaving in and out, with the melody always bound tightly to ‘em. Then they blast Into the Unknown: A brief single, plucking guitar and distant-treated vocal with a second tonal guitar underlay intro, and then the rest of the band come powering in. The chug and the call-and-response chorus camouflage the faintest echo of Starman in the song. Keeping the booster rockets on they enter the bridge: back comes the treated vocals and a slicing and dicing guitar solo that never loses the through line. Way further down It Doesn’t Matter Anymore is a full-on rocker, mixing both castigation and consolation; the tart and sweet of it matched by the declarative lead vocal and the interjecting backing chorus, along with the morphing, yet always tuneful guitars.

The garage numbers also aren’t simplistic, though classic grinders they remain at heart. Take Family Provider: its intro is the fuzz guitar, organ wash and pounding drums that have led thousands of garage-rock tunes. But the verse vocals come in softer, wrapped in a light gauze of reverb giving the tune a psych twist, which is only heightened by the guitar phasing and enunciation in the bridge. The rhythmic rocker Hunch sounds like my long lost friends from Lund, the Sinners, with Mathias eerily resembling Sven Köhler (at least as my failing memory remembers those early singles), and you have to dig the razor-sharp, six second drum solo. Then just past the two minute mark the song shifts: While still on the raw side it goes blue-eyed soul, call-and-response and then fades out on a countryish guitar solo. 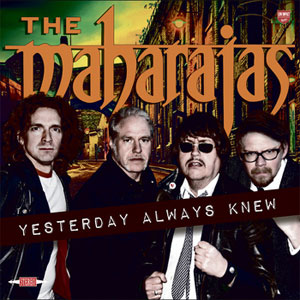 Mr. Lindberg steps out front for the mid-tempo ballad Water to Wine, bringing his organ up with him: a pensive, dulcet number. At 4’ 39” Hands of Tyme, another ballad, is the longest cut here. Built on a melancholic vocal, big fuzz guitar and an assortment of psych efx, it goes down as well anything else on board.

It’s been, what, six months since I’ve overcome my innate laziness and was impelled to scribble out one of these screeds. If there is even a dozen records this fine to be had in 2015 you’ll be sick of me quicker than I can down a pint of bitter.

Here comes Jens Lindberg again, adding a brand new chapter to the Swedish garage/beat legend. Just like on The Maharajas’ Misty Lane 10“ release from a few years aback, what they’re offering here is “something […]

Not being in the mood to back up last year’s “Best Album in 2005 according to POPISM” title, The Maharajas still managed to at least sneak into this year’s list as well, with this short […]

After the re-release of The Crimson Shadows’ complete works three years ago (on In Between records), it was about time to do the same with The Stomachmouths’ back catalogue and thus, make the Swedish/Stockholm ’80s […]