Your Really Got Me: The Story of the Kinks [ABC/Voiceprint]

Unfortunately this is another poorly cobbled together package. Contrary to the PR blurb “This DVD contains some of the Kinks finest moments and is full of rarely seen performances from the sixties right through to the nineties…,” this is not rare material. The bulk of the material, particularly the full length clips, are taken from two sources: German TV show Beat Beat Beat, from 1965, and the video version of the 1980 live release One For The Road, shot in a Providence, RI arena in 1979 (both of which are available in whole separately). Added to that is the inclusion of three late-period, MTV videos: “Predictable,” “Come Dancing” and “State of Confusion,” and some (what looks like even later period) cut-up interview segments with Ray, Dave and Mick Avory, not to mention a plethora of montages of stills and very brief snippets of some other video pieces. 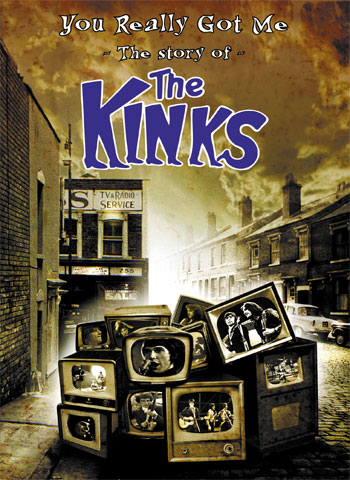 To create “The Story of the Kinks” they have a voiceover narration providing a basic timeline (which, to make matters worse repeatedly overlays some of the video segments), and then use out-of-time, mix-and-match renditions of some of their songs to illustrate this timeline. The most incredulous segments are when they insert what looks like the One for The Road rendition of “You’ve Really Got Me” in the video’s narrative about being the band’s first hit (when they could have at least used the Beat Beat Beat version, which would been around the actual time of its release). And when they try to cover the period when the band was banned from playing in the U.S. with One For The Road renditions of “Celluloid Heroes” and “Superman.” Huh?!?

That is followed up with their now most cherished mid-‘60s period via a complete “Well Respected Man” from the Beat Club, a brief snippet of a promo film for “Dead End Street” with the disruptive voiceover obscuring most of it, then some more similarly treated, abridged tv show excerpts of “Waterloo Sunset”, “Days” and “Village Green Preservation Society.” Now if they included those performances complete and some of the others that they cut up even more that are found throughout and relegated the narrative to a Secondary Audio Program, that would make this something worthwhile. I won’t even get into the screwed up editing of the narration at the end when it starts repeating itself. As it stands the most interesting things are the short interview bits (I haven’t been able to place their origin), especially when Ray talks about the evolution of his songwriting and their songs. Oh well.

The Kinks at “Once More With Felix”

Recorded 44 years ago (7th of January 1969) for the BBC show Once More With Felix. I have know about it existence for some time, but I never pictured myself seeing the clips. Both Last […]