Too Late For The Byrds, Too Early For R.E.M.

Some heroes end up on the popcharts, some end up in a pop dictionary, some get a page in some small fanzine. Then there’s the group Skooshny that didn’t end up anywhere. It’s time to change that. In the last issue of Now & Then, Skooshny was given a little space at the last minute in the reviews section.

The reason was that when Bill Forsyth at Minus Zero Records asked me to review the album, I thought it was a rock symphony — a quick glance at the cover prompted misgivings to that effect. But, as a favor, I listened to the album a few days before the magazine went to press. The indifference of the first few listenings gave way to admiration, and after two days I was prepared to rate Skooshny an eight.

Since then, I’ve spun the CD Skooshny [Minus Zero MZR-1] another 50 times or so. If there is any group that should have been given space in the former article “American Pop 1976-79,” it’s Skooshny. But rock groups just don’t call themselves Skooshny, and rock groups don’t survive without gigs. Above all, rock groups are not supposed to sound like untidy versions of the Byrds during the mid-1970s.

Skooshny’s world is not easy to penetrate. If XTC could be called IQ-pop, then Skooshny might be described as labyrinth-pop. The music takes many turns before it reaches its goal. Furthermore, vocalist and composer Mark Breyer’s lyrics are at times so obscure that he admits he sometimes doesn’t understand them himself. That one of his favorite lyricists happens to be Keith Reid of Procol Harum says a great deal.

Just don’t get the impression that Skooshny’s music is inaccessible. There are many Byrds influences, and Kinks, Big Star, Left Banke, and R.E.M. (!) also come to mind.

Skooshny’s story dates back to 1970 when drummer David Winogrond started the band Brevity in Chicago together with Rick Vittenson and Mark Breyer, among others. The group members were a bit too young to be part of the Chicago scene of the 1960s, when bands like New Colony Six, American Breed, Shadows of Knight, and Buckinghams were at their height. But there are clearly influences from the British Invasion.

– The Beatles and Kinks meant a great deal to me and still do today, explains Mark Breyer. We were unusually lightweight for being a pop group in 1970.

The record company Straight/Bizarre was interested, but nothing came of it. Studies and other activities came in the way, and it wasn’t until 1975 that the group came together anew. By that time both David Winogrond and Mark Breyer had moved to Los Angeles. There they met guitarist Bruce Wagner and started recording new songs. It would take another three years before the recordings were released. 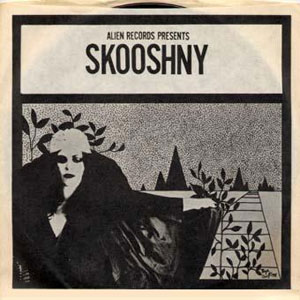 In 1978, an EP with four songs appeared [Alien VIL 1917]. The best of the tracks is The Ceiling To The Lies, which has the mark of greatness by the very first verse.

On the whole, there are a lot of Byrds influences, but the results sound distinctively late-70s. There is much pain here, yet the results are nevertheless beautiful, as in 5D (Fifth Dimension) or Goin’ Back. It Hides More Than It Tells also stands out. After a soft intro featuring an organ and birdsong, guitars come in and lend it great force.

Cakewalk is unwieldy and shouldn’t really stick, but the refrain is like a double-take. Odd Piece In The Puzzle is, unfortunately, just plain tiresome.

Mark Breyer’s lyrics are almost always melancholy, and he relies to a great extent on metaphor. But on Cakewalk he shows a more humorous side.

– The song is about a janitor who dreams that he’s Davey Keon, one of Toronto’s most famous ice hockey players. I have always been very interested in ice hockey and thought it would be a funny theme. By the way, my second favorite player is Börje Salming.

The main problem had to do with the band’s name. Skooshny was a name that even the group’s fans hated, and the fact that it was Russian for “boring” obviously didn’t improve what were already slim odds. Mark Breyer accepts the blame for the name.

– For a while, he says, I was sold on everything that had to do with the Soviet Union. I got into Russian culture and even learned a bit of Russian.

In looking through an old issue of the American fanzine Bomp, I noticed a half-page ad for Skooshny’s EP. Between blurbs lifted from the magazines Trouser Press and New York Rocker, there was a quote from Ivan Grozny (meaning “Ivan the Terrible”), the noted music historian. Breyer divulges Ivan’s true identity:

– I was the one who put the comment there, he confesses: ‘As if the Younger-than-Yesterday Byrds met the Kinks Face to Face.’ I wanted to establish that we were something in between the Byrds and Kinks.

There was also the problem of not owning a car. The group was based in Los Angeles, but none of the members had a car, and to not own a car in Los Angeles is a bit like hunting moose with a pea-shooter. It was hell getting to the recording studio, and getting to gigs was out of the question.

– I was never directly involved in the Los Angeles scene, he says. In the mid-70s, my favorite bands were the same ones that were popular during the 60s. That was probably why we sounded the way we did. But when Graham Parker and Elvis Costello appeared, I had a burst of new inspiration. 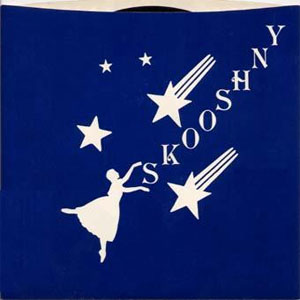 In 1979, the single Crossing Double Lines/You Bring Me Magic [Alien VIL 1919] came out. The A-side was sloppy and barely appropriate as an A-side. But the B-side was considerably more pleasant, with its beckoning refrain. It might have turned into something.

Arista showed some interest. But the whole thing eventually fell through, and the band was dissolved.Against this background, I’m still surprised after the fiftieth or so listening that the group’s music maintains such a high caliber and that the band had already found its own unique sound in 1975.

I’ve upgraded the eight (the original mark I gave the album in the last issue) to a nine, perhaps even a ten.

– It was actually Greg Shaw at Bomp Records who had the tapes, Mark Breyer explains. He used to be in London a lot, and one day he mentioned that there was an English guy who was crazy about our two singles. After a lot of fuss, Bill finally got hold of the tapes. 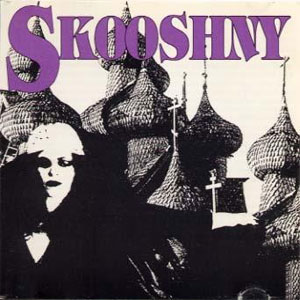 The CD contains eleven previously unreleased songs and there is hardly a single one that I would want to do without. It should also be said that the songs were recorded under rather primitive conditions and were probably intended only as demo tapes.

The songs are a bit untidy, and the Byrds influences stand out. Still, the band’s style is altogether unique (and definitely ahead of its time). The proclamation “Too late for the Byrds, too early for R.E.M.” says the most about the group’s sound.

For example, the trilogy Trish de la Roe, Fever Dreams, and The Mood In Me (which date from the same period as the EP) might have graced any Byrds album and is actually a notch above Big Star.

After the group split up in the late-70s, the members got back together in the early-80s to record some demo tapes in the studio of Michael Penn. Six songs from these sessions are included on the CD, and they are nothing short of dynamite.

Dessert For Two and You Cracked My Code are sparsely decorated songs with plenty of ambience to spare. The tough Masking The Moon exemplifies the clever variations typical of the band. Malibu sways gently forward. Riga has a Be My Baby intro and then builds into classic pop. Rounding out the album is the Russian hit Podmoskovnye Vechera (Moscow Nights in English), which is sung in Russian, naturally.

The best thing of all is that we may not have heard the last of Skooshny. The band members have been back in the studio working on a few new songs. Dare we hope for a continuation?

(translated from the Swedish by Scott London)

The Jesus And Mary Chain – A Taste Of…