Having heard most of Ray’s recorded output, one thing that escapes me is what exactly did he mean by the “fall” in this title ?! Well, I guess it would’ve sounded too strange like “The Rise Of Ray Brandes” and that’s why he added the other thing too.

But … if he wanted to let us know that this album covers all the musical aspects of his career, then I understand, cuz you’ve got it all here. This Town Keeps On Running back to the Tell-Tale days, adding a sound that’s ought to make you “feelgood”, which it really does, while Pinata and The Most Dangerous Game push that power-pop button, spiced with the omni-present latent r’n’b feel.

The C & W segment of the album is completed with the “byrd-without-wings” tribute Tried So Hard which naturaly flows into another country tune called The Ballad Of Lake Herman Road with that familiar “spacemannish” feel.

I Know You’re In Love Again could’ve find it’s place on any of the fab’s ’64/’65 albums, with the guitar line making it very clear that “what you see” is a gentle Beatly pop tune. 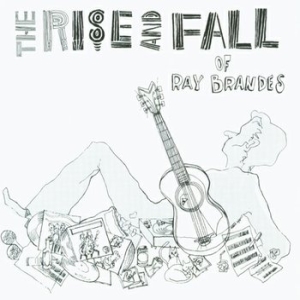 Maybe it’s the Slowhand’s rave-ups what you would usually expect from Brandes, but instead, the album ends with a lovely “clap-toned” ballad which is meant to conquer the top of the charts worldwide. Of course, as always, Ray adds a little something, and here, it’s the sweet mantra-like ending that he has found somewhere “across the universe”.

Drifting back to the European continent, San Diego’s most beloved “continental drifter” takes another piece of perfect Americana right into the heart of Spain, and hopefuly back to the world.