The renowned English rock writer Nick Kent was one of the first music critics that was influenced by the gonzo journalism movement, which is a style of writing without any claims of objectivity – often including the reporter as part of the story by means of a first-person narrative. This way of working is not unlike what is called “participant observation” by behavioral scientists when they study the life of a group of individuals through an intensive involvement in their everyday activities. Nick Kent applied such kind of investigation technique (perhaps unaware of its scientific connections) on rock musicians.

By doing so, he sometimes managed to creep under the musician’s skin through his engagement in their personal lives. He himself also lived the life of a rock star – with all the pros and (subsequent) cons that this brought about.

Nevertheless, special doors opened by his approach as a participant in the spectacle, which made it possible for him to socialize on a semi-friendly basis with celebs as: Iggy Pop, The Rolling Stones, Led Zeppelin and David Bowie. Consequently, Nick Kent has many interesting or, rather, stunning things to tell in Apathy for the Devil, his second book, in which he shares his personal memories of the 1970s.

If you wonder where the title of the book comes from, it originates from a judgement made by Bob Dylan with regard to The Rolling Stones’ live performances in 1976 when heavy drugs started to take their toll on the quality of Jagger/Richard’s musical output.

Since the author was born in 1951, his timing of birth gave him many opportunities as a receptive youngster to have first hand experience to the thriving English music scene of the 1960s. Intrigued by that, Nick Kent became a name in rock journalism circuits early in life due to his initiated and heartfelt writing about music. Recruited from a fanzine, he teamed up with a new breed of writers that helped to turn the dwindling circulation numbers of the weekly London music newspaper New Music Express in the early seventies. His enrolment did not come by chance, since he certainly has a way with words that also readers that do not have English as first language can appreciate. Most probably, his early interest in literature and the English language helped him along in that respect.

However, prompted by the participant observation method, his endurance was eaten away by a flamboyant lifestyle. Around 1975 the situation had become so deranged that his authorship started to wobble. Living as junkie in the margin of society on soiled mattresses certainly did not enhance his writing quality nor his output. Consequently, not every aspect of what may be considered as the most interesting part of the London Seventies’, namely the punk scene that peaked in intensity in 1977, is covered in the book. It is a truth with restrictions, though. In the mid-seventies, his extensive network seemed to embrace practically every important person involved in London’s music life. Kent gives fascinating accounts of, amongst others, his partner Chrissie Hynde (who also wrote for NME, and was his co-member in The Subterraneans), Malcolm McLaren and the advent of The QT Jones and the Sex Pistols, and Elvis Costello’s musical entry. It is nevertheless somewhat surprising that he do not mention neither Andrew Matheson and his fellow Brats nor Chris Spedding since they were important catalysts making hullabaloo right down his very alley. An excuse for this limitation may be that inclusions of that kind would have blown the idea of a medium thick book to smithereens. 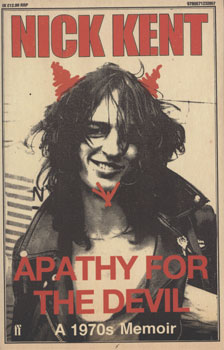 It is too much to say that a person’s music interest reflects her soul, but at least it tells something about what is going on in the head of that individual. I bring this up because at the end of the book Nick Kent enclose an overly democratic list with about ten songs or albums for each year of the seventies that he calls “Soundtrack for the Seventies” showcasing music that meant the most to him during that time.

An eclectic list indeed, containing diverse artists as experimentalists as Can and jazz rockers as Steely Dan side by side with plain rock’n’rollers as The Cramps and The Clash. Congratulations to you, Nick Kent, for having such inclusive taste that overrides the inbuilt tension in a diverse list that would induce schizophrenia in many other listeners On the other hand, the omission of one of the few lights in the glum first years of the 1970s, The Flamin’ Groovies, is not at all in your favor.

Shoemaker, please stay at your last.