I finally got to read Faking It after all these years. But this time gap matters less, since the framed topic is still valid and maybe even more relevant today. The question of authenticity is not only a timeless one, but also constitutes an interesting and complex issue. Hugh Barker’s and Yuval Taylor’s reasoning about what is considered authentic in popular music is instructive just as the conclusions drawn in the last chapter are edifying. 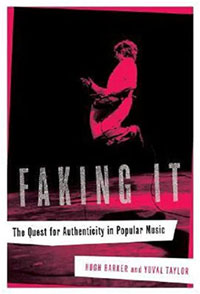 What I also like about Faking It is its broad perspective of popular artists – from John Smith Hurt to KLF over diverse artists such as Kurt Cobain, Jimmie Rodgers, The Archies, Neil Young, Donna Summer and Moby, amongst others.

Readers with preconceived notions about the constituents of genuine music are invited to get an ear-opener in the beginning of the book, in which the situation is revealed regarding the marketing strategies deployed already in the 1920s by the expanding record industry, which meant that certain types of music were declared and marked as “real” in order to fixate a diametrical contrast to music that came from Tin Pan Alley and its equivalents. Hence, categories as “race” and “hillbilly” were formed and launched for marketing reasons.

Compare this refinement and categorization with the roaming Lomaxes’ quest for authentic and pristine music, untouched by other music styles, which made them search for it in isolated enclaves, like prisons (cf. Lead Belly, whose career they masterminded in a way that accentuated certain traits of his musicianship; those considered to be the most primeval ones).

Jimmie Rodgers is presented in the book as an early example of an artist who borrowed from different sources in order to successfully marshal his own personal style. Just like him, many artists in popular music are multi-faceted and therefore difficult to pigeon-hole into a certain genre. We have frequent examples of artists who cross over between chart lists, just as in-between genre concepts like “country soul”.

In a way, the search for “pure” music therefore seems pretty pointless and futile. Instead, popular music must be regarded as an open system embedded in the society at large, ensuring import and export of cultural ideas and influences between different styles in a boundless manner. It is not far-fetched to transfer the concept of the advance of popular music to the consequences brought forward by Darwin’s theory of biological evolution, which implies that an overly limited gene pool can be threatened with extinction by excessive inbreeding. It is a sign of the times that the current inspiration flow between hip-hop/R&B and country/rock do not seem to be as abundant as before.

Only because the music is honest and genuine does not necessarily make it better. Consider the transfer of John Lennon’s limited set of primal therapy sessions to music on the one hand, and the childish saccharine shock enjoyment of Don Kirshner’s totally artificial creation, The Archies’ Sugar, Sugar may bring on the other hand. Authenticity does not automatically make Lennon’s Mother better than the things he did with The Beatles.

Furthermore, to strictly enforce the authenticity requirement, does that mean you have to discard the early Monkees (who refused to record Sugar, Sugar, by the way) because their official members did not play on The Monkees’ first recordings? And bethink that rock’n’roll music is built around an image that has very little to do with kitchen sink realism. Things like these make the position as a hard-core purist concerning authenticity somewhat hard to defend. 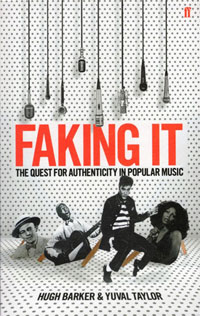 Whether you know all about the artists’ backgrounds and their recordings or not, it does not have to mean that you cannot buy into the whole authentic–fake spectrum without losing credibility. In this way, your personal inclination and what you currently prefer transcends the issue of authenticity, which means that what remains at the end of the day is two kinds of music, good music and the other kind (as Duke Ellington put it). Faking It underlines this fact and stresses the personal perspective, which is truly liberating. Beauty is in the ear of the beholder! So: “Come out of the cupboard, you boys and girls” who haven’t yet.

Faking It is thus for you who hesitate to dare to show your real listening preferences and everyone else who wants to improve their music experience by even more knowledge.