Last issue I put my 2¢ in on the Great Rock Revival. Well it continues, though as a commercial mother lode my guess is it’s almost played out. Which is a shame for this subset, as their records are just starting to come out here in the U.S. of A.

Not that the two Kiwis are overnight sensations, having been laying it down Down Under for a number of years, hell the D4 album — just out next week here, along with the Datsuns’ who have already toured here a few times — first saw the light of day back in ‘01.

In that way the Aussie Casanovas are catching a bit of draft from the other two, plus all the blather about the Vines. Not that any of them are doing stuff you haven’t heard before, nor offer anything particularly witty or incisive lyrically.

First hinted at by the last Garageland album,it’s the Datsuns and D4 also mark New Zealand’s continuation of melding into the Great Rock Globalization.

The former draws on ‘70s Rust Belt, in particular the Detroit/Cleveland Axis — MC5/Rocket From The Tombs/Dead Boys — while the latter focuses in on the NYC traditions of the same period — New York Dolls/Ramones — and particularly the Devil Dogs.

Which is not to say that the bands don’t like to mix things up. The opening track of 6Twenty, Rocknroll Motherfucker, is a two-minute re-envisioning of Kick Out The Jams. While the opening number on The Datsuns, Sittin’ Pretty, is a semi-boogie that calls up the ghosts of very early AC/DC and post-Fillmore Humble Pie.

Truth be told, my impression of the Datsuns was formed by seeing them play live a number of months before hearing this album. As I go through it for the first time the Boogie has as much a place of prominence as anything else.

Take for example What Would I Know, they pull bits from all over 1972: the key riff sounds right out of the Alice Cooper songbook (not that $&^#@)* “Prince Of Darkness” but the group), there’s a classic cowbell (something dearly missed during the ‘90s), and a Bolanesque warble of a lead vocal in the verses.

Meanwhile the single Harmonic Generator is a mid-tempo bit of post-‘76 Art-Punk — you can just sense Crocus Behemoth dying to whip out his horn — complete with some Tish & Snookie (see Stilettos) backing vocals. MF From Hell is their own turn on Kick Out The Jams.

Around the mid-point on that line between the preceding two poles is the slow boiling, taut Fink For The Man. The “Tish & Snookie” girls return for the otherwise Birdman-styled, complete with organ, Detroit/A² rocker In Love.

The record closes out with the epic (6 min.), headbanging, semi-boogie, workout Freeze Sucker, cut once by a clear, wailing guitar solo then after the middle “drop out” segment (just bass & drums with fading guitar sustain, then a whispered, echoed vocal) cut again by another, this time with a kind-of Dickey Bettsian phrasing. Unless you can really crank this stuff at home, the true joy is still found live. 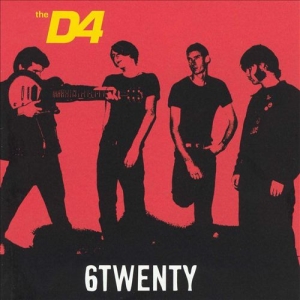 As much as The Datsuns meets certain nutritional daily requirements, 6Twenty is the shit, as someone once said to me. It’s just hot damn fun Rock & Roll. And I’m currently depressed as hell because last night the D4 were supposed to play their first ever gig here in Philly and they got beat to town by our biggest snow storm of the season, 8” (surpassed three weeks later by another 18”), and the fucking gig got cancelled. You would think by forty-five I’d have more important stuff to be concerned about. But, I don’t.

Anyway, the US version of the album, as well as reissued foreign ones, adds the latest single Get Loose — a sub-two minute stompin’ rocker with an out of nowhere, honkin’ Alto Sax solo and a responding guitar solo snippet, then a quick drop down followed by a burst to the end — so now you get thirteen fine slabs of kick-ass stuff.

The following, Party (now appearing on NHL playoff commercials everywhere), starts with a drum roll like a four-man bobsled team coming out of the chute and then each guys hops in and the band is blasting through the first turn until they get into the bottom half where the big “U”(bridge) is and things start rumbling: the voices go into an overlapping cadence that snaps together on the second iteration (this is one of the few lyrical parts that is more than just the title repeated again and again) over a drop down segment then once more with everything as the speed picks back up, which feeds into a flanged, treated guitar solo/jet fly-by and then a five second drum solo to line up everyone for the final blast past the finish line. Final time 2’28,” not counting the tacked on sound effects which overlap with the beginning of the next number Come On.

Included on the album are three covers and they do exactly what you expect: they’re not worn out by a million others, they show how the band sees themselves, they give respect to what’s come before and, most significantly, they don’t overshadow the band’s own songwriting (not because they’re crap songs, but because the band has the skills and craft to match them).

First is a tightened up (Snyder’s rule #2 about covers is that they should almost always be shorter than the original, even if it’s only a 15 second difference like here), fuller sounding, relatively straight reading of the Heartbreakers’ Pirate Love.

Second is Guitar Wolf’s Invader Ace, where they wipe away all that gauze of noise and distortion from the original and hone it to a knife’s edge. The last one is the Scavengers’ Mysterex the poppiest thing on this record, complete with handclaps and some “ooooooooh” backing vocals — could pass for an undiscovered Good Vibrations release. (It beaks rule #2 by coming in a handful of seconds longer than the original, but I can’t pin point why.)

[The Scavengers were one of the New Zealand’s first Punk bands. The song, a sneering rant, is from 1978 and is supposed to be about the band’s former lead singer (not dissimilar to the Shades Joe College To You, but that’s another story). Taking over vocals was bass player Ronnie Recent, better known these days as Brendan Perry of Dead Can Dance (boy did he take a wrong turn). They then moved to Melbourne down in Australia and transformed into the Marching Girls, who put out one single, the classic True Love. You can hear and read about all this stuff on the Flying Nun AK79 compilation.] And out there somewhere are singles with versions of the Devil Dogs’ North Shore Bitch and the Sonics Santa Claus on their B-sides.

Sorry about getting lost on that tangent; back to the band’s own stuff: grinding rockers a plenty. Ladies Man is a bit more mid-tempo and comes augmented by an uncredited organ — hell neither version of this album tells you who anyone in the bands is.

Rebekah features a more ‘70s, efx driven lead guitar, plus a drop down to just bass followed by a pounding reassembly as it heads on home. Exit To The City goes with harmonized lead vocals.

Like with the Datsuns they saved their longest number for last: Heartbreaker is a moody, winding, mid-tempo tune with an intro right out of Devo’s Mongoloid or Bauhaus’ Bela Lugosi’s Dead but an overall tenor more in line with the Flamin’ Groovies’ Slow Death or very early Died Pretty. 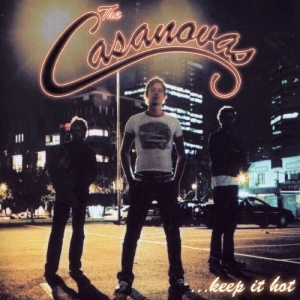 The Casanovas …Keep It Hot is contains only five tracks, two of which were on a previous 7” from two years before, and would normally belong in the beginning-to-lose-all-meaning A Single Thought.

But I’ve got this theme working, so here we go. But I’m missing a word: If the Donnas would be the distaff Casanovas, the Casanovas are really the “what” Donnas (though there are only three of them)? ‘Cause that’s what plops down in my cranium whenever I hit play.

The title track enters on another one of those Alice Cooper derived riffs and chugs its way around the oval. Nasty picks up the pace slightly, adds a lightly distorted vocal treatment and lays in an extended (last two minutes of the chune) taut, drop down instrumental break — toms and understated bass, that build up with an oscillating guitar and then an overdubbed second one for some panning and interweaving fun — which leads out with a big, fat, but crisp guitar solo.

Won’t Go Down, another rocker, comes out of its nicely tuneful guitar solo once more into the chorus, but this time they throw in an added couplet composed of strong, tight harmonized vocals, which could be overdubs but I like to think it’s a sign of potential.

Too Cool, the B-side to the earlier single, has the hopped up, over-revved tendencies of youth, though stuffed in there is a pounding piano which is a cool treat. The A-Side, 10 Outta 10, has a portentous synth intro and then leads into a classic slice of early Mötley Crue — for good or ill, depending on your prerogatives — not that I’ve ever had a Mötley Crue record and thus really know what the hell I’m talking about.