Just like Borack’s first Shake Some Action book (2007; a re-print is currently under way), this 2.0 update is the author’s personal guide for everyone who wants to travel through the land of power pop without missing the sweetest spots. Shake Some Action 2.0 is of course gefundenes Fressen for all newcomers in the area of power pop. Rookies in the subject certainly get the basic map here to navigate by. Others, more firmly rooted in the concept, are invited to use the guide as a check list just to make sure that everything is under control – been there, alternatively filling previously unnoticed blanks.

Furthermore, Shake Some Action 2.0 allows your own favorite list of power pop albums (real or virtual) to be compared with one prepared by a specialist with a lot of experience in the field. In that way, you get a refreshing alternative to your own personal views. Recalibrating the personal perspective may be worthwhile every now and then, because things like taste are rarely totally fixed in time. Borack has made some adjustments himself during the eleven-year spell that has elapsed between the two editions; he has new entries along with runners up or down of albums included in the first Shake Some Action book.

As a music journalist John M. Borack is quite active. He has appeared in magazines such as Goldmine (check out his blog Power Pop Plus), Trouser Press and Amplifier. In 2010, he published a book on John Lennon (Life Is What Happens: Music, Memories, & Memorabilia). A similar one seems to be in the pipe-line; The Beatles: 100 Pivotal Moments That Shaped A Band And Its Music. He also plays drums in Popdudes and he has written numerous liner notes for CD-compilations.

Instead of deep-diving in to the details of Borack’s list, some general statements can be made on the way he arrived to the outcome. To begin with, is of course the obvious difficulty to determine what music is power pop and what music is not. John M. Borack is aware of this demanding task and handles the delimitation well in my opinion. Apart from that, his decision to concentrate only on the album format complicates matters further, since fillers are present in most albums and downgrade their overall impression – a fact that also is valid for power pop albums (believe it or not). It is much harder to make a proper evaluation of albums than it is to assess individual songs. His choice to include compilations does not help the situation. 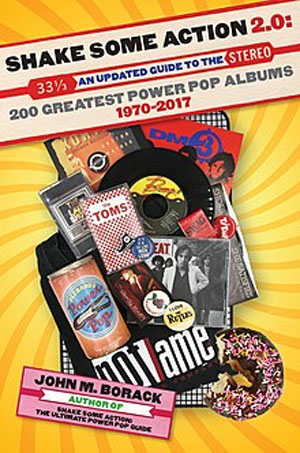 I am also a little wary to the fact that Borack ranks only one album per artist (ranking Big Star: #1 Record and Radio City at the same position is the telling exception of how to come around this dilemma). Sure, this one artist-one album practice allows for more variety, but at the same time many solid albums that de facto should have been among the Top 200 are prevented to make an impression on the list. Sometimes there is a close shave between which is the first and second best album of an artist that makes selection of the correct one even harder. Also, this procedure fixates Shake Some Action 2.0 very much to the first book, since the test of time may have caused a reversal of the order regarding a particular artist’s top album. Such reversal is thus (unfortunately) never allowed to be introduced in the present list.

Borack rounds up the usual suspects in the top positions (Raspberries: Starting Over and, already mentioned, Big Star: #1 Record and Radio City), while 20/20: s/t and The Beat: s/t are runners up to the top five compared with Borack’s 2007 ranking. For Flamin’ Groovies fans, the title of the book may be a disappointment since The Groovies’ Shake Some Action album from 1976 shows up first at # 21.

One fun thing with Borack’s ranking is that it can help (with a relatively small effort) to paint the development of power pop over time with a big brush; power pop’s roller coaster evolution since Emitt Rhodes s/t (1970). By register the year each ranked album was released, a chart can be made which shows the year-by-year frequency of top power pop albums (blue bars; see below). Two time-periods stand out as particularly eye-catching, especially if top positions are given extra weight (orange bars); first the 1977–1982 period and then, a little less conspicuous, the years between 1995 and 1997.

The first period should not be a surprise. After all, artists that belonged to this “second wave of power pop” stand on the shoulders of the ground-breaking first wave bands such as Big Star, Raspberries and Badfinger; groups that defined the original power pop sound in the early 1970s. An explosion of power pop band picked up the baton during the New Wave. The initial sound was sometimes spiced with tougher elements inspired by the then flourishing punk attitude. During this time period, bands like The Plimsouls, The Spongetones and The Shoes made their mark in history.

Less talked about is the peak from 1995 to 1997; what may be called the “third wave of power pop”, approximately when bands like DM3, Cotton Mather and solo artists such as Matthew Sweet and Tommy Keene pushed the power pop sound to the next energy level. A time-period well worth investigating in depth. It is reasonable to argue that this third wave – just as the previous one – was caused by a self-reinforcement due to the presence of a large enough number of peers that inspired and spurred each other. 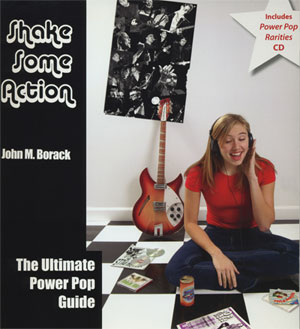 Each entry comes with a short text with comments and information of the album and/or group. At the end of the book there is a table that summarizes the positions of all 200 entries in the present list and in the first Shake Some Action book. Another table contains albums in the 2007-list that dropped out. We also get Borack’s top ten power pop album 1996–2017 and a substantial section with his previously published reviews. The book closes with his personal experience of how soothing music can be at times.

Focusing on the predominantly virtues of Shake Some Action 2.0 instead of aforementioned, and after all, marginal shortcomings, means that this book is highly recommended to all of us that want to explore the power pop territory further and challenge our habitual taste pattern.

Time will tell which of Borack’s new entries have the endurance needed to find their way in to Shake Some Action 3.0. Following five may have good prospects to do so:

You can't put your arms around an mp3!