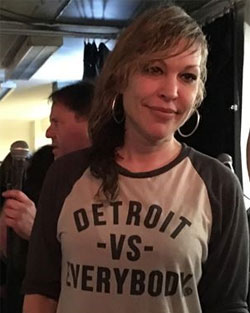 The world’s most original cover band, The Detroit Cobras, has been active in different constellations since the ‘90s. Their discography includes five albums released between 1998 and 2006.

Now they are back in full swing with Stay Down from their split single with their drummer Kenny Tudrick’s Lightning Byrd on Black River House/Wild Honey Records; both songs are written, recorded and produced by Kenny Tudrick.