English music biographer Zoë Howe has for the last ten years, or so, been deeply engaged in passing on features of rock music and its musicians in books on such luminaries as Wilko Johnson, The Slits, Stevie Nicks and Lee Brilleaux. She is firmly settled in the music environment. One of the children of an iconic music figure that appears in her book How’s Your Dad: The Sons and Daughters of Rock Royalty [2010] is her husband Dylan Howe (Yes (sic!), him). This relation implies that she has direct access to a part of the music industry network that extends from Britain. Inquiries within the music establishment may of course be facilitated by such contacts. Yet, it is hard to judge whether these links have been vital in her Barbed Wire Kisses – The Jesus and Mary Chain Story under consideration here about the, to a great extent, voluntary outsiders The Jesus and Mary Chain.

Brothers William and Jim Read comprise the backbone of The Jesus and Mary Chain; a dysfunctional couple that against all odds got things going. It seems like their music making was a reaction to the pure boredom that prevailed in the small Scottish town south of Glasgow they were vegetating in as kids. The first audible results were bedroom Portastudio experiments built on the formula of a very deliberate and organized drenching of the ‘60s pop music idea – illustrated by bands as The Velvet Underground, The Stooges and The Beach Boys – beneath heaps of guitar feedback. A new structure of contrast between white noise and cool, calm and collected singing was created that way. Or, as Jim Read is quoted in the book: “Shangri-Las crossed with Neubaten.”

The Jesus and Mary Chain had a lot to prove with their first album Psychocandy [1985]. Expectations were high after New Musical Express hyped their first tumultuous gigs (at which the art of ducking on stage became a survival necessity). This was of course neither the first nor the last time the musical press hyped unproven bands. Tabloid pushing of this kind is most common in Britain and means nothing in most cases. Contrary to what seems to be the case in North America, British bands are sometimes prematurely forced into the recording studio by this hype, before they have had the chance of gaining enough experience as a live band by repeatedly testing their material in front of a live audience. Critical awareness of such plugging in the musical press is needed and also Hans Olofsson was rightfully suspicious of this hype in his 1991 Jesus and Mary Chain overview (Swedish only). However, The Jesus and Mary Chain proved to be one of the few exceptions, much thanks to their different, distinct and thoroughly elaborated concept.

At the same time as The Jesus and Mary Chain wanted and struggled for stardom, they had a hard time handling their popularity. Maybe the awkwardness was due to a combination of plain shyness and reluctance to deal with the downside of music business. Liquor and other substances was then a way, at least in the beginning, to cut across and drown out practicalities that was not directly related to the music itself. And the strained, yet close, relationship between the Reid brothers escalated this need. Far from consulting a “psychiatric coach” like Metallica, they kept hassling each other while producing a series of fantastic albums in the ‘80s and ‘90s in a way that resembles how The Ramones was ticking for the first five years; another seemingly “dysfunctional” band. Even though their fourth member from time to time consisted of a drum machine, this did not help to stabilize The Jesus and Mary Chain and the volatile chemistry bounding between the brothers finally snapped like a rubber band breaks when William Read walked out from their 1998 US tour.

Zoë Howe’s book on The Jesus and Mary Chain [2014] understandably covers a lot more distance than John Robertson did in The Jesus and Mary Chain – a musical biography [1988, Omnibus]. But you can’t judge a book by the publication year. As a matter of fact, Howe tells very little about what happened during and after the hiatus 2000–2006 (when the Reid’s sister, Linda, acted “The Kofi Annan of The Mary Chain” in the healing process). In this way the publication year promises more than it delivers, keeping the reader’s updating incomplete. Another shortcoming is that only brother Jim chose to engage in the storytelling, which might skew the story a bit. But, with this said, it is not my intention to scare you off from reading Barbed Wire Kisses – The Jesus and Mary Chain Story because I want to stress that the positive qualities dominate. The story is skillfully told and the book brings loads of chronologically arranged and sometimes hilarious details to the reader. Zoë Howe gives a vivid picture of excellence in stubbornness (this partly explaining their popularity) and the way the Reid brothers grew up. The psychologically charged tension between the band members is uncovered with a feeling and empathy that gives nerve to the text. 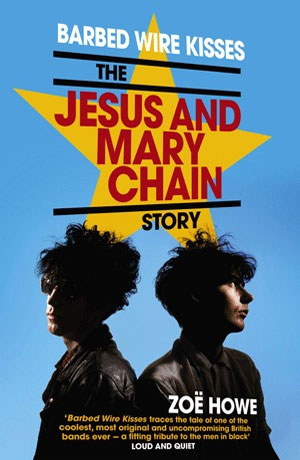 The formidable and very detailed discography at the end of the book, containing all alternative takes, which must drive all die-hard completionists nuts. However, beginning in the other end, following tasters – or rather – obvious choices, from each of The Jesus and Mary Chain studio albums (including their latest since almost twenty years) is a good way to get started and also to appreciate how the band continuously evolved within their confined working concept throughout the career:

The Jesus And Mary Chain – A Taste Of…

Once is an incident, twice is a trend and trice is a tradition; hence the traditional list of 20 favorite albums of the year 2017 – the eclectic way, as traditionally. 01. The Golden Boys […]