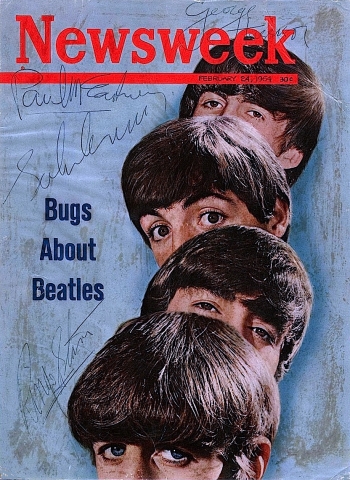 Even though you may not have been around – as in perhaps not even born yet – you’ll have no doubt heard all over the place and elsewhere lately that it’s been, yes, 2,608 weeks since that act you’ve known for all those years first invaded America, drew 73 million viewers to a certain Ed Sullivan Show and, well, forever changed the world from the hairline on downwards.

Nevertheless, at the risk of bursting any remaining sacred Beatle bubbles, I thought I should take this opportunity to bring to your undivided attention, a half-century after the facts and purely in the interest of public service, a grand ceremonial total of…

FIFTY FAB FIBS:
Things that are Just Not True about You-Thought-You-Knew-Who

2. Paul McCartney could sing Little Richard better than anybody else in his neighbourhood.

3. George Harrison could play Raunchy better than anybody else …at least on a particular local bus route. 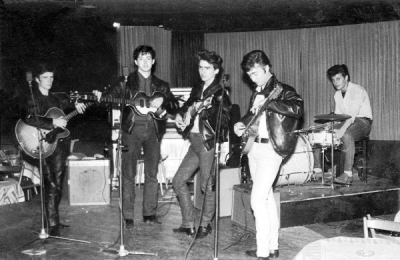 4. Stu Sutcliffe couldn’t play bass, or, for that matter…

6. The Beatles were the best rock and roll band Hamburg had ever seen …or heard.

7. The Beatles, once they got home from Hamburg, were the best rock and roll band in Liverpool.

8. The Beatles could have – in fact, would have gotten a recording contract even if Brian Epstein had never entered The Cavern.

9. The Beatles would have made such great, great records even if George Martin had never been assigned to twiddle their knobs, as it were.

10. John Lennon would have gotten to know Spain just as well had Brian Epstein never twiddled his… oh, never mind.

11. The Beatles refused to invade American until scoring a number one record there first.

12. John F. Kennedy’s assassination helped The Beatles get a number one record in America.

13. Plus, of course, there was no really good rock and roll on the American charts after Elvis went in the Army, was there?

14. Such was The Beatles’ instantaneous appeal to even juvenile delinquents across the North American continent, not a single crime was committed by a teenager during the one hour it took to broadcast the February 9, 1964 Ed Sullivan Show
(…I happen to know this to be untrue, as a house just two blocks over from my parents’ had a porch light burgled that very night, somewhere between Tessie O’Shea and Till There Was You). 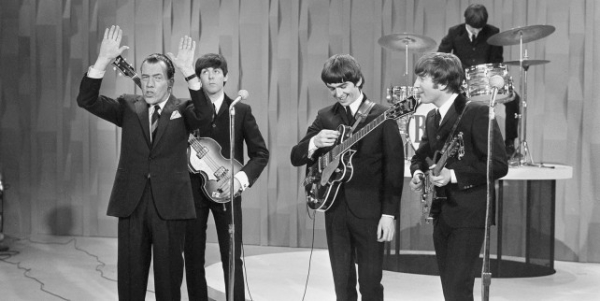 15. Ringo was the best actor in A Hard Day’s Night.

18. Bob Dylan brought along his own pot during the Beatles’ 1964 North American tour.

19. I Feel Fine featured the first feedback ever heard on record.

20. Ticket To Ride featured the first heavy metal ever heard on record.

21. The Beatles brought along their own pot during the making of Help! Which reminds me…

22. Help! was a great movie. It never should have starred The Dave Clark Five instead.

23. Yesterday was the first Mersey ballad George Martin ever scored for strings.

24. Norwegian Wood was the first ballad, Mersey or otherwise, ever scored for sitar.

25. In truth, Norwegian Wood was about a clandestine affair John Lennon was conducting with journalist Maureen Cleave at the time
…or maybe it was Peggy Lipton.

26. Rubber Soul was the Beatles’ “folk-rock” album (…at least in America it was). 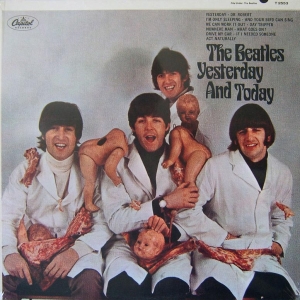 28. The original Yesterday …and Today “butcher cover” was the Beatles’ reaction to (a) the Vietnam war, (b) Capitol Records’ bastardizations of their previous UK albums, and/or (c) Bob Dylan’s leftover pot.

29. In 1966, The Beatles were more popular than Jesus …certain southern American states notwithstanding.

30. A couple of weeks later in 1966, The Beatles quit touring because they just couldn’t hear themselves play, not to mention their new material was simply too complicated and difficult to properly reproduce upon the concert stage. It had nothing whatsoever to do with the tens of thousands of seats which went unsold during their final North American tour. Certainly not.

31. P.S.: and The Beatles sold more records in America that year than Herman’s Hermits. Or, come to think of it…

32. The Beatles sold more records in America the following year than Herb Alpert.

33. The Penny Lane and Strawberry Fields Forever promotional films were the first high-concept [pun probably intended] pre-recorded clips ever produced for a rock and roll record.

34. The Penny Lane and Strawberry Fields Forever films were more fun to watch than that week’s episode of The Monkees.

37. Paul McCartney thought it was a good idea to get straight to work on Magical Mystery Tour immediately following Brian Epstein’s tragic death.

39. Somebody thought it was a good idea to start Apple Corps.

40. The Beatles (White Album) was rock and roll’s first double album …or even its best. 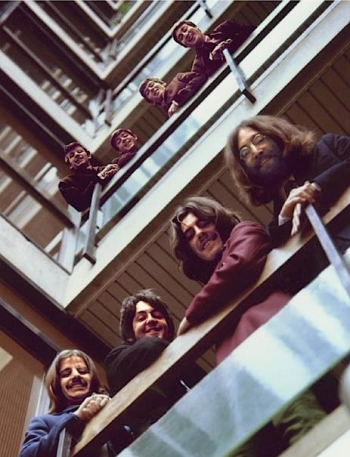 41. John Lennon thought The Beatles wouldn’t mind if Yoko Ono sat by his side throughout the ill-fated Get Back sessions.

42. Paul McCartney thought George Harrison wouldn’t mind being told how to play guitar throughout the Get Back sessions.

43. Nevertheless, the Let It Be film is going to be out on DVD and Blu-ray any day now. But until then, just in case you forgot…

44. Yoko Ono broke up The Beatles.

45. But the Beatles got back together, united in a spirit of full and total cooperation, to make Abbey Road.

46. Then Yoko Ono broke up The Beatles again.

48. Finally, Phil Spector ruined the Let It Be album. Even so,

49. The Beatles were the GREATEST rock and roll band EVER.

50. And The Beatles are going to get back together some day. I mean, they finally got their Lifetime Achievement Grammy™, right ??

Meet The Beatles… only Somewhere Else.

Being eight years old in the Toronto suburbs of 1963, I was at the perfect age – and in the perfect place – to, yes, Meet the Beatles. Because by the time “those four youngsters […]